BY Heather Hughes on April 29, 2019 | Comments: one comment
Related : Soap Opera, Spoiler, Television, The Bold and the Beautiful 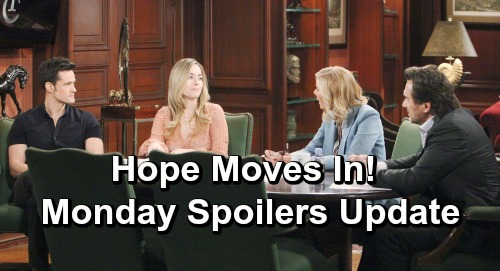 The Bold and the Beautiful (B&B) spoilers update for Monday, April 29, tease that Shauna Fulton (Denise Richards) will warn Zoe Buckingham (Kiara Barnes) not to move a muscle. She’ll be more than willing to let Zoe feel the wrath of her stun gun. Shauna will demand answers from Zoe, but Flo will start to stir on the floor. As she slowly regains consciousness, Flo will fill Shauna in on who Zoe is and why she’s there.

After Flo forces Shauna to put the gun down, she’ll point out that Zoe’s dad started this mess. B&B fans know Dr. Reese Buckingham (Wayne Brady) stole Hope Spencer’s (Annika Noelle) baby and let her grieve over someone else’s dead one. He roped Flo into pretending to be the birth mom, so she became part of the adoption scam that duped Steffy Forrester (Jacqueline MacInnes Wood).

However, Flo just can’t take the guilt anymore. Zoe will insist she was doing them all a favor by trying to keep Flo quiet. She’ll remain convinced that a confession would bring disastrous results, but Flo won’t care. Now that Flo’s part of the Logan family, she just won’t think she can keep lying to them – especially Hope. 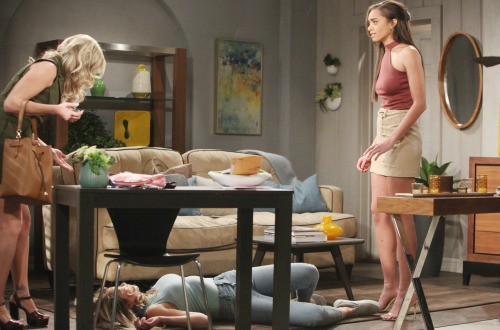 Of course, Shauna will side with Zoe on this. She’ll argue that Flo should find a way to deal with her remorse instead of ruining everything.

Over with Ridge Forrester (Thorsten Kaye), he’ll weigh in on Bill Spencer’s (Don Diamont) proposal to Katie Logan (Heather Tom). Ridge won’t think another marriage between them is a good idea, so he’ll voice his opinion to Brooke Forrester (Katherine Kelly Lang).

Afterward, Hope will have updates on Liam Spencer’s (Scott Clifton) trip to Paris. She’ll note that his visit has been perfect. Hope will assure “Bridge” that Liam’s taking the girls to the park and doing all the things a great dad should.

As Brooke considers her daughter’s loneliness, she’ll push Hope to move back to the main house for a while. Brooke will think it’d benefit Hope to be around people who care about her.

Thomas Forrester (Matthew Atkinson) will pipe up that Douglas Forrester (Henry Joseph Samiri) would love that. Despite Hope’s initial hesitance, Thomas will talk her into it by milking the kid angle.

Other Bold and the Beautiful spoilers say Hope will reflect on all Flo’s wonderful gifts. She’ll think Flo’s given so much through “Phoebe Forrester” (Isabella de Armas and Rosalind Aune) as well as her friendship. Hope will also appreciate the blood ties between them, so she’ll just want to do something nice for her cousin. She’ll view it as a way to give back.

Hope will decide they should find a place for Flo at Forrester Creations. Ridge will worry about Flo’s employment there making Hope uncomfortable, but she’ll insist that won’t happen. Hope will truly want to be around Flo and repay some of the joy she’s brought to their lives.

Back at Flo’s apartment, she’ll go against Shauna and Zoe’s wishes. Flo will resume her efforts to call Hope, but it’ll be Hope who gets through first. A rattled Flo will listen as Hope offers her a position at Forrester.

Flo won’t know what she could really do for them, but Hope will think they can figure that out. She’ll promise there’s no pressure, but she’d love it if Flo would come on board.

The Bold and the Beautiful spoilers say Shauna’s eyes will light up at the thought of that. She’ll think Flo can have it all if she just stays tight-lipped. As for Zoe, she’ll realize this mess is worse than she thought!

We’ll keep you posted as other B&B news comes in. Stick with the CBS soap and don’t forget to check CDL often for the latest Bold and the Beautiful spoilers, updates, and news.