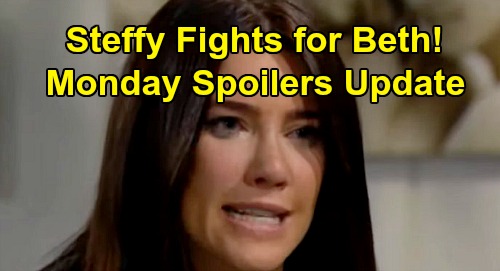 The Bold and the Beautiful (B&B) spoilers update for Monday, August 12, tease that Sally Spectra (Courtney Hope) will be shocked by Florence “Flo” Fulton’s (Katrina Bowden) deception. She knows something went down between Flo and Wyatt Spencer (Darin Brooks), but she could never predict the crazy story she’s about to hear. Sally may have a hard time keeping up as Wyatt drops bomb after bomb.

Flo joined forces with Dr. Reese Buckingham (Wayne Brady), who stole Hope Forrester’s (Annika Noelle) baby and gave her to Steffy Forrester (Jacqueline MacInnes Wood) – in exchange for Taylor Hayes’ (Hunter Tylo) money of course. Sally will be appalled when she hears about Flo posing as the fake birth mom and wreaking havoc on so many lives. She’ll hate that Steffy, Hope and Liam Spencer (Scott Clifton) were victims in all this.

Sally may ask how Wyatt’s holding up since he was lied to as well. Things didn’t end the way Sally wanted with Wyatt, but she still cares about him. Wyatt clearly cares about Sally, too. He pointed out that despite the chaos, nothing was more important than tracking Sally down and making this right.

Wyatt will offer a sincere apology for overreacting to Sally’s trivial mistake. It was nothing compared to the wild lie that Flo sold and kept quiet about for months. Sally should appreciate the gesture, but what does this mean for “Wally’s” future? They may just focus on wrapping their heads around the drama for now. Perhaps they can set aside some time to talk eventually and see what happens between them.

Other Bold and the Beautiful spoilers say Steffy and Hope’s baby war will press on. Hope’s ready to finally take her daughter home, and she warned that Steffy shouldn’t try to stop her. However, that won’t deter Steffy. She’ll be adamant that “Phoebe Forrester” aka Beth Spencer (River Davidson and Madeline Valdez) shouldn’t be ripped from her house and family.

B&B fans can expect another round of conflict on Monday, but Hope will stand her ground. She intends to take Beth back whether Steffy approves or not – and Steffy obviously doesn’t! The Bold and the Beautiful spoilers state that Steffy will struggle to believe this is real. It’ll feel like a horrible nightmare she can’t wake up from.

Nevertheless, Steffy will ultimately have no choice but to say goodbye. She’ll sob as Hope walks out with Beth and leaves Steffy minus a sweet little girl. It looks like some devastating scenes are coming up. We’ll give you updates as other B&B news emerges. Stay tuned to the CBS soap and don’t forget to check CDL often for the latest Bold and the Beautiful spoilers, updates and news.