The Bold and the Beautiful Spoilers: Steffy Moves On With New Man After Losing Beth – Kelly Gets a Stepdad?

BY hellodrdavis on August 11, 2019 | Comments: one comment
Related : Soap Opera, Spoiler, Television, The Bold and the Beautiful 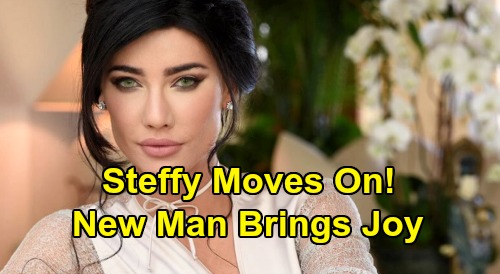 The Bold and the Beautiful spoilers tease that Steffy Forrester (Jacqueline MacInnes Wood) may soon be re-evaluating her life. She’s about to undergo a major life change that she wasn’t anticipating or wanting, and that’s the loss of her youngest daughter, “Phoebe Forrester.” Steffy is going to have to hand her daughter, who’s really Beth Spencer (River Davidson and Madeline Valdez), over to Hope Logan (Annika Noelle) and Liam Spencer (Scott Clifton).

Of course, the good news is that the little girl will always be a part of Steffy’s life, since she’s Kelly Spencer’s (Chloe Teperman and Zoe Pennington) little sister, but it won’t be the same for Steffy. It’s going to be devastating for Steffy to watch Hope walk out the door with Beth, but that’s just the way it’s going to have to be.

So, what will Steffy do from here? B&B viewers will remember that the last time Steffy faced a major life change – when she lost Liam to Hope – she coped with the situation by “choosing herself” and putting everything into her career and raising her daughter Kelly. But this time, she’s losing more than a man…she’s losing a daughter, and she’s going to need a plan to deal with it.

Chances are, we’ll see Steffy head back to work once again and fill her time being the best co-CEO she can be. But there’s something else that Steffy might do, something that Steffy fans have been long clamoring for…and that’s getting back on the dating scene.

B&B viewers will remember Steffy’s brief flirtation with “Leo” (Sam Myerson) last year. Ever since then, fans have been hoping that Steffy would get a new man. Well, perhaps now is the time!

Since it sure looks like Liam is going to go right back to Hope and Beth, Steffy likely won’t even consider a future with Liam. Sure, she and Liam had a one-night-stand recently, but it didn’t at all seem to indicate that either one of them wanted to get back together. Plus, it really seems like Steffy deserves someone new – perhaps a wildly successful businessman (kind of like Leo!) who could sweep her off of her feet.

Of course, if Steffy does get together with someone new, then that could make things interesting with Liam, since anyone who Steffy dates could ultimately become a stepdad for Kelly. And that will add an interesting wrinkle to Steffy’s independence, if Liam decides he wants to have a say in who ultimately ends up in Steffy’s life going forward. We could see some future conflict there.

At any rate, it sure seems like Steffy needs a new direction after this whole Beth storyline. Fans will only want to see Steffy suffering and processing her grief over losing Beth for so long, and then it will be time for something new. Would you like to see Steffy with a new man? Stay tuned to the CBS soap and don’t forget to check CDL often for the latest Bold and the Beautiful spoilers, updates, and news.