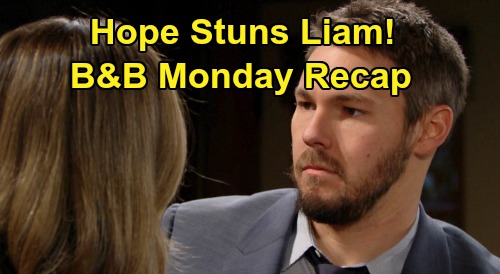 The Bold and the Beautiful spoilers recap for Monday, December 30, reveal that Steffy Forrester (Jacqueline MacInnes Wood) and Hope Logan (Annika Noelle) spoke in the Forrester design office. Hope informed Steffy that Thomas Forrester (Matthew Atkinson) was on a date with Zoe Buckingham (Kiara Barnes) and that it could last the entire night. Steffy was happy about the development, and Hope noted that it seemed that Thomas was actually moving on.

Steffy then went back to the CEO office, and Brooke Forrester (Katherine Kelly Lang) arrived. She revealed that she had seen Liam Spencer (Scott Clifton) about his plan to use Zoe to get intel on Thomas’ intentions for Hope. Brooke noted that she was on board with the plan, but that she still had doubts about Zoe’s trustworthiness. She then learned that Thomas and Zoe were on a date that might last all night long.

Steffy and Brooke rehashed the plan and Steffy noted that she just wanted her brother to have really moved on from Hope. Brooke expressed skepticism with Zoe’s ability to find out the truth if she becomes blinded by her attraction to Thomas, and she noted that they might be setting Zoe up for heartbreak. She then said that Steffy had to understand that one night with Zoe won’t be confirmation of anything.

Brooke asked Steffy to think about how she’d feel if she were in her position and Kelly Spencer (Zoe Pennington) had gone through what Hope went through. Steffy understood, and she also asked Brooke to keep an open mind about what Zoe might find. Brooke then reiterated that she thinks Thomas needs professional help and that she still thinks that he’s obsessed with Hope.

Meanwhile, at the Forrester mansion, Zoe and Thomas continued their romantic date. Zoe questioned where she really stood with Thomas, given that it wasn’t that long ago that he was really into Hope. Thomas said that while there was nothing he could say that could convince her, he was hoping to show her that he had moved on.

At Hope and Liam’s cabin, Hope told Douglas Forrester (Henry Joseph Samiri) that he was spending the night, which thrilled him. Liam came home and soon learned that Douglas was staying the night. He was surprised when he heard the reason why – that Thomas was on a date with Zoe and that is was possibly going to last the whole night.

Hope expressed relief that Thomas was interested in someone other than her, and Liam skeptically noted that it would be interesting to see how the evening went. Hope wondered why Liam wasn’t more excited about this, since it seemed like Thomas was moving on. Hope went on about how Douglas deserves a father who’s healthy and stable, and that this could perhaps even repair Brooke and Ridge Forrester’s (Thorsten Kaye) marriage.

Liam remained disturbed by the idea of Zoe possibly sleeping with Thomas, but he kept this from Hope, saying only that he hopes that Thomas proves that he’s over Hope once and for all. Hope noted that she felt a new chapter was beginning tonight, and that Thomas was with the woman he should be with.

Back at the Forrester mansion, Zoe thanked Thomas for the wonderful dinner and said that this is fairytale princess stuff that she used to read about as a kid. Thomas took her hand and told her that this was just the beginning. He then suggested that they go on a walk of the grounds before pulling Zoe into a passionate kiss. After a few kisses, he told Zoe that he wanted to take her upstairs.

Zoe seemed totally taken in by the passion, and the two headed for the stairs, hand in hand. Once upstairs, Thomas lit some candles and told Zoe that they could start something special tonight right then and there. They then kissed passionately and fell back onto the bed.