The Bold and the Beautiful Spoilers: Monday, December 9 – Steffy Warns Thomas To Stay Away From Hope – Brooke’s Marriage Ends

BY hellodrdavis on December 6, 2019 | Comments: 3 comments
Related : Soap Opera, Spoiler, Television, The Bold and the Beautiful 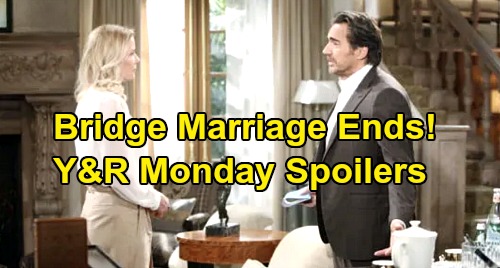 The Bold and the Beautiful spoilers for Monday, December 9, tease that Steffy Forrester (Jacqueline MacInnes Wood) will have some harsh words for Thomas Forrester (Matthew Atkinson). As B&B viewers know, Steffy has just learned that Thomas asked Hope Logan (Annika Noelle) to return to Forrester Creations and work with him on her Hope For The Future line. That was enough to enrage Steffy, but she also learned that Thomas used Douglas Forrester (Henry Joseph Samiri) to help try to convince Hope to say yes to the request.

According to B&B spoilers, Steffy will proceed to call out Thomas on his actions. Steffy was clearly hoping that Thomas was going to give his obsession with Hope a rest and allow Hope to go on with her life with Liam Spencer (Scott Clifton) and Beth Spencer (River Davidson and Madeline Valdez). But now Steffy can see exactly what Thomas has in mind, and that he’s trying to get closer to Hope by using her love for both Douglas and her Hope For The Future line.

Well, Steffy will let Thomas have it, but B&B spoilers say that Thomas will end up giving as good as he gets. She’ll tell Thomas in no uncertain terms to stay in his own lane and let Hope and Liam live their life together, but Thomas will probably insist that Steffy will benefit from his overall plan, too. Thomas thinks that Steffy and Liam belong together, and he’ll probably tell her that if all goes well, he’ll have Hope in the end, while she gets Liam back.

Meanwhile, on the new episode of B&B on Monday, December 9, Brooke Forrester (Katherine Kelly Lang) will have an unwelcome response for Ridge Forrester (Thorsten Kaye). Ridge has just made a huge plea to Brooke about how he wants to save their marriage at all costs, and that he’s willing to put in the effort and hard work if she is.

But what Ridge really wants is for Brooke to say that she’s willing to forgive Thomas for his past misdeeds. From Ridge’s perspective, this is the only way forward for their marriage. As B&B viewers know, he stated that he was willing to forgive Brooke for what she had done – which is a lot, when you consider that she withheld Thomas’ alleged death from Ridge. He’s willing to put these terrible past few months behind them and move on with life together, just like he thinks they’re meant to do.

However, the Bold and the Beautiful spoilers say that Brooke won’t agree to Ridge’s terms. She’ll be completely unwilling to forgive Thomas for what he did to Hope, or even to try to forgive him. It looks like she’ll be defiant with Ridge and tell hm that she just can’t do what he’s asking. And B&B spoilers say that she’ll have some terms of her own, as she tells Ridge exactly what it will take for them to reunite.

It remains to be seen exactly what Brooke’s terms are, but it will likely mean that he’ll have to turn away from Thomas in some fashion. At this point, that’s the one thing that Ridge just won’t be willing to do. Sadly, B&B spoilers say that Brooke and Ridge will end up signing the divorce papers and ending their marriage, as this chapter of “Bridge” comes to an end.