The Bold and the Beautiful Spoilers: Monday, June 17 – Hope Panics Over ‘Lost’ Photo of Phoebe – Brooke Sees Through Thomas

BY hellodrdavis on June 14, 2019 | Comments: one comment
Related : Soap Opera, Spoiler, Television, The Bold and the Beautiful 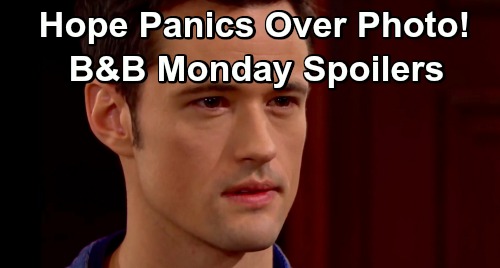 The Bold and the Beautiful spoilers for Monday, June 17, tease that Thomas Forrester’s (Matthew Atkinson) actions will lead to a disturbing revelation for Hope Logan (Annika Noelle). To comfort herself after her split from Liam Spencer (Scott Clifton), Hope requested some photos of Liam and the girls.

He promptly sent the photos, and one in particular caught Hope’s eye…a stunning close-up of Phoebe Forrester (River Davidson and Madeline Valdez).

Thomas later caught Hope looking at the photo, and in an attempt to discourage her from focusing on Phoebe – who he now knows is her daughter Beth Spencer – Thomas permanently deleted the photo from Hope’s phone. It was yet another sneaky move on Thomas’ part designed to help him achieve his ultimate goal.

From Thomas’ point of view, it will serve him well if Hope forgets all about Phoebe and focuses her energy on Douglas Forrester (Henry Joseph Samiri), since Thomas wants a future as a family with Hope and Douglas.

But according to B&B spoilers, Hope will quickly notice that the beautiful picture is missing from her phone, and she’ll likely assume that she deleted it by mistake. She’ll be horrified and distraught.

Hope just can’t shake the deep connection that she feels toward Phoebe, even though she doesn’t fully understand why she feels the way that she does. She just chalks it up to Phoebe being a Logan by birth.

The Bold and the Beautiful spoilers say Hope may question why losing the photo upsets her so much, and Thomas will likely suggest that she forget about the photo and focus on his son instead.

Meanwhile, on the new episode of B&B on Monday, June 17, Brooke Forrester (Katherine Kelly Lang) will continue to feel weird about Thomas’ behavior toward Hope. Brooke recently admitted to Ridge Forrester (Thorsten Kaye) that she didn’t care for Thomas’ intensity when it comes to Hope, and shortly thereafter saw him embracing her daughter.

The Bold and the Beautiful spoilers say that Brooke will witness more of Thomas’ behavior toward Hope that will unsettle her. Specifically, she’ll see something that will make her realize that Thomas is using Douglas as a pawn to help him get Hope for himself. Brooke won’t like what she sees, as she won’t want to see Douglas used to pull at Hope’s heartstrings.

It will be interesting to see what Brooke’s next move will be. She might go to Ridge with her observations, but she’ll have to be careful not to rock the boat too much. Ongoing B&B spoilers say that she’ll eventually have a frank talk with Thomas about his behavior, but will brazen Thomas listen?