BY hellodrdavis on June 22, 2019 | Comments: one comment
Related : Soap Opera, Spoiler, Television, The Bold and the Beautiful 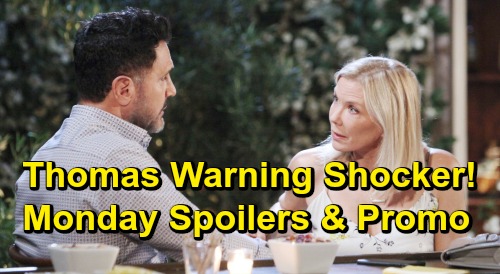 The Bold and the Beautiful spoilers for Monday, June 24, tease that Thomas Forrester (Matthew Atkinson) will have some quick decisions to make. He was just in hot pursuit of Emma Barber (Nia Sioux) in his car, when Emma suddenly swerved off the road and her car tumbled down an embankment. Emma apparently died at the scene, and now Thomas will have to decide what to do.

Whether Thomas flees the scene or stays and offers up some story about why he was following Emma remains to be seen, but it’s pretty much a sure thing that whatever Thomas does will be conniving and underhanded. We have to remember that Pam Douglas (Alley Mills) saw Thomas and Emma together at Forrester Creations, and that she saw Thomas take off shortly after Emma did, so Thomas will need a cover story about that.

At any rate, Thomas seemed villainously pleased that Emma had met her end, as this pretty much ensures that the secret about Hope Logan (Annika Noelle) and Liam Spencer’s (Scott Clifton) little girl will remain a secret for the time being. Thomas will still have Zoe Buckingham (Kiara Barnes), Xander Avant (Adain Bradley), and Florence “Flo” Fulton (Katrina Bowden) to deal with, but at least Emma has been neutralized.

Meanwhile, on the new B&B episode on Monday, June 24, Brooke Forrester (Katherine Kelly Lang) will turn to a familiar face for support. She’ll meet up with Bill Spencer (Don Diamont) to vent about the goings-on in her personal life – specifically, the things going on between Thomas and Hope.

Of course, Brooke doesn’t like Thomas’ obsession with Hope, and she thinks that Thomas (and everyone else) just needs to give Hope some breathing room before encouraging her to embark onto another relationship. After all, she just annulled her marriage to Liam, and she needs some time to adjust to her new normal.

According to B&B spoilers, Brooke and Bill will reflect on Thomas’ past and present behavior, but Brooke will be surprised by Bill’s reaction to the whole situation. Brooke is strongly “team Lope,” and believes that Liam belongs with Hope no matter what. But Bill will have different thoughts on the matter.

As B&B viewers know, Bill recently offered his full support for Liam and Steffy Forrester’s (Jacqueline MacInnes Wood) union, even though they are just co-parenting at the moment. According to B&B spoilers, Bill will let Brooke know that he’s tired of his son ping-ponging between women and wants him to have stability with Steffy.

Brooke surely won’t like to hear that, and it doesn’t look like she’ll get very far with Bill conceding Thomas’ dangerousness where Hope is concerned. Of course, given the recent events with Emma, B&B viewers know that Thomas is indeed dangerous, but will anyone ever listen to Brooke about that?