BY Heather Hughes on March 11, 2019 | Comments: one comment
Related : Soap Opera, Spoiler, Television, The Bold and the Beautiful 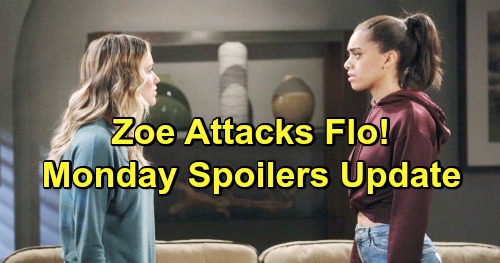 Zoe will be deeply concerned about Wyatt Spencer’s (Darin Brooks) post on social media. She now knows Flo’s been hanging out with Wyatt and Liam Spencer (Scott Clifton) as well. Zoe just won’t understand why Flo can’t grasp how dangerous this is. She’ll confront Flo about the risks of bonding with Hope and those closest to her.

B&B spoilers say Flo will give Zoe another shock when she reveals her link to Wyatt. Since Flo and Wyatt were in love back in high school, Zoe will completely lose it. She’ll think this coincidence spells nothing but trouble. Zoe won’t care about any old feelings that might’ve been stirred up or even new connections – like the one Flo’s found with Hope. She’ll argue that all of this has to stop right now.

Of course, guilty Flo will suggest that instead of backing off, she should just come clean about everything. She hasn’t been able to do it so far, but she’ll feel like she can gather up the courage. Flo will contend that Hope is suffering and needs to know her child is alive. The Bold and the Beautiful spoilers say Zoe will spar with Flo as usual, so they won’t be able to reach a solution.

Dr. Reese Buckingham (Wayne Brady) will have to step in later this week, but there’ll be plenty of suspense in the meantime. Sally Spectra’s (Courtney Hope) heart will go out to both Hope and Flo. She’ll talk to Wyatt about what they’ve been through and what they’ve lost. Sally believes Flo gave up her baby by choice, but she’ll still note that Flo was pregnant and didn’t take her daughter home.

That’ll lead Sally to think about Hope’s similar situation. She’ll point out that Hope was expecting at the same time and never got to bring her bundle of joy home either. The Bold and the Beautiful spoilers say that’ll give Wyatt something to mull over. This significant hint could get the wheels turning eventually.

Will Wyatt figure out the truth about Beth? Not anytime soon, but don’t be surprised if he picks up other clues along the way. The Beth puzzle just might fit down the road. We’ll give you updates as other B&B news comes in. Stay tuned to the CBS soap and don’t forget to check CDL often for the latest Bold and the Beautiful spoilers, updates, and news.