BY hellodrdavis on March 15, 2019 | Comments: one comment
Related : Soap Opera, Spoiler, Television, The Bold and the Beautiful 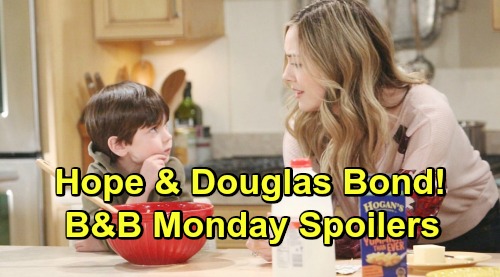 The Bold and the Beautiful spoilers for Monday, March 18, tease that the Forresters and the Spencers will show their support to Thomas Forrester (Matthew Atkinson) and Douglas Forrester (Henry Joseph Samiri), as they’ve just returned home after Caroline Spencer’s (Linsey Godfrey) untimely death. Caroline died of complications related to a blood clot, and her death took everyone by surprise.

According to B&B spoilers, both Ridge Forrester (Thorsten Kaye) and Taylor Hayes (Hunter Tylo) will be comforted to have their son and grandson back home during this very sad time, but they’ll be surprised to learn that Steffy Forrester (Jacqueline MacInnes Wood) is still planning to leave for Paris with Kelly Spencer (Chloe Teperman and Zoe Pennington) and Phoebe Forrester (Isabella de Armas and Redford Prindiville). Ridge and Taylor naturally assumed that Steffy would be staying put to support her brother through this tough time.

But Steffy will let it be known that she is still planning to take off for Paris as planned. In fact, Thomas may even insist that Steffy continue on with her life uninterrupted. Thomas and Steffy have a strong bond, and Thomas won’t want Steffy to put her plans on hold for him. Plus, he’ll likely understand that Steffy has good reasons for wanting to leave for a while, namely to give Liam Spencer (Scott Clifton) and Hope Spencer (Annika Noelle) some space and time to heal from their own loss.

Meanwhile, on the new episode of B&B on Monday, March 18, Thomas will notice something special happening with Douglas. Of course, Douglas is a bit too young to realize exactly what’s happened to Caroline, so he’s not grieving like the rest of the family. And, according to B&B spoilers, he’ll make a new friend…and that’s Hope.

Sensing that Douglas is missing his mother’s presence at the family gathering, Hope will go out of her way to connect with Douglas and bond with him. Douglas will enjoy spending time with Hope, and it won’t go unnoticed. B&B spoilers say that both Thomas and Taylor will notice the relationship blossoming between Hope and Douglas, and that Thomas in particular will be touched by Hope’s attention to his son.

It seems that Thomas and Douglas will be on the B&B scene to stay, and they’ll rally with family as they prepare to say a final goodbye to Caroline. It looks like Hope may play a crucial role in Douglas’ life going forward, and that Thomas will welcome her influence. The situation will probably be good for Hope as well as for Douglas, and it may help her heal from Beth Spencer’s death.