The Bold and the Beautiful Spoilers: Caroline’s Death Sparks Fan Outrage – Was It a Mistake to Kill Her Off?

BY Heather Hughes on March 15, 2019 | Comments: one comment
Related : Soap Opera, Spoiler, Television, The Bold and the Beautiful 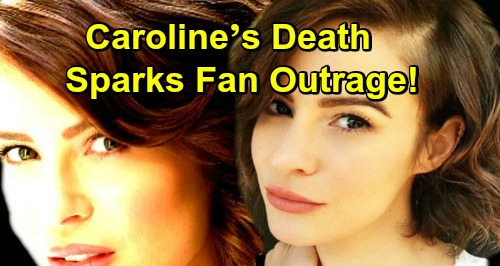 The Bold and the Beautiful (B&B) spoilers tease that Caroline Spencer’s (Linsey Godfrey) tragic fate will drive the storyline in the coming months. This is how B&B has chosen to reintroduce Thomas Forrester (Matthew Atkinson) and Douglas Forrester (Henry Joseph Samiri) to the canvas, but many B&B fans aren’t happy about it. Killing off Caroline is a huge deal, so we have to wonder…was it a mistake?

Caroline was a crucial character once upon a time. Her pairing with Ridge Forrester (Thorsten Kaye) certainly had some support, but The Bold and the Beautiful ultimately went in another direction. Caroline and Thomas didn’t seem to really take off as a couple, but it was still nice to have Caroline around. She had family connections in Los Angeles and was likable in the right stories.

However, Caroline was written out and Linsey Godfrey scored the role of Sarah Horton on Days of Our Lives. That meant Godfrey wasn’t available to return, but it’s doubtful B&B would’ve brought her back anyway. Caroline’s death seems to be a plot point meant to shove Thomas together with Hope Spencer (Annika Noelle). They’ll bond as Hope becomes a mother figure to Douglas in the weeks ahead.

While we can understand why B&B would be tempted to work that angle, it’s a shame Caroline had to be sacrificed for it. She could’ve been recast at some point and brought back for new storylines. Some people are especially outraged since all of this is for a Thomas recast. No one knows if Atkinson will be well-liked in the role yet. If he’s a flop, Caroline’s death will have been for nothing.

Plus, there’s no job security in the soap world. Days has been doing some cast cuts lately, so who knows how long Godfrey will stick around over there? We certainly wish her the best of luck, but it’s a tough business. Godfrey might’ve been free to make a Bold and the Beautiful comeback months or years down the line. Now B&B has eliminated the option.

The fact that the show’s doing this offscreen is a problem, too. It weakens the emotional impact of Caroline’s death and makes us wish she could just have remained alive in New York. Thomas still could’ve returned and just visited Douglas from time to time. Most soap characters aren’t going to win any awards for parenting, so nobody cares if Thomas sees Douglas enough or not.

Bottom line, we’d say the decision to kill off Caroline is shortsighted and disappointing. It’s a bummer, but the show must go on. The Bold and the Beautiful spoilers say Caroline’s demise will set up some interesting couple shakeups, so at least some drama will come out of it.

Do you think it was a mistake to kill off Caroline? We’ll give you updates as other B&B news comes in. Stay tuned to the CBS soap and don’t forget to check CDL often for the latest Bold and the Beautiful spoilers, updates and news.