BY Heather Hughes on May 27, 2019 | Comments: Leave Comments
Related : Soap Opera, Spoiler, Television, The Bold and the Beautiful 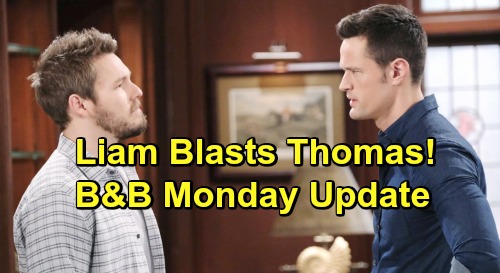 Hope will have it all planned out for Liam’s ex and her own former rival. She’ll describe the details of this perfect life she imagines for Steffy, Liam and those adorable girls. Since Hope and Liam are getting a divorce, Hope won’t see why “Steam” can’t live the dream. She can’t force them to get back together, but she’ll at least request it and hope that Steffy tries to see this her way.

Hope will think Kelly Spencer (Zoe Pennington and Chloe Teperman) and “Phoebe Forrester” (River Davidson and Madeline Valdez) deserve the best possible scenario. In her mind, that’s two reunited parents under one roof. Hope may envision Kelly and “Phoebe” growing up with a mom and dad who are in love. That’s what she wanted Beth Spencer to see, so she’ll want that for Steffy’s daughters now.

Of course, Steffy will think Hope’s going a little overboard here. It was Hope’s call to end her marriage, but she can’t decide if Steffy winds up back with Liam. Steffy may want Hope to dial down her enthusiasm and let this happen naturally. If Steffy’s meant to reunite with Liam, they’ll inevitably recreate their spark. Hope will push for the outcome she wants, but the ball will be in Steffy’s court.

However, Steffy’s feelings for Liam never really went away. As much as she tries to fight Hope on this, she’ll know it’s what she wants deep down. It’s just a tricky situation that’ll need to be handled with care. Steffy will want to proceed with caution for the sake of all parties involved.

Other Bold and the Beautiful spoilers say Liam will deliver a warning. He’ll insist that Thomas Forrester (Matthew Atkinson) should listen up and get one thing threw that thick head of his. Liam will argue that Thomas will never have true love with Hope. She adores Douglas Forrester (Henry Joseph Samiri), but Liam will think that’s the extent of it.

Thomas may fire back that he convinced Hope to part ways with Liam. He’ll undoubtedly think he can convince her to love him, too. Liam still won’t agree that real love’s possible for “Thope.” He may contend that if Hope ever chooses to be with Thomas, it’ll only be because she’s thinking of Douglas. B&B fans can definitely expect some tense moments as Liam goes off and Thomas takes umbrage.