The Bold and the Beautiful Spoilers: Xander’s Hard Choice, Protect Zoe or Tell Hope Beth’s Alive – How Does He Decide?

BY Sean O'Brien on May 26, 2019 | Comments: one comment
Related : Soap Opera, Spoiler, Television, The Bold and the Beautiful 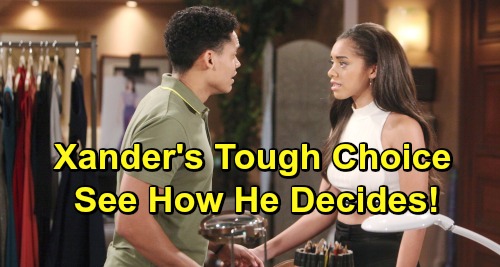 The Bold and the Beautiful spoilers tease that Xander Avant’s (Adain Bradley) world becomes chaotic the instant he learns what his restored girlfriend, Zoe Buckingham (Kiara Barnes), is involved in. With thoughts of her troubled days seemingly passed, Xander will be beside himself not knowing what comes next.

Learning that Beth Spencer (Madeline Valdez and River Davidson) never died would be incredible as a standalone reveal. But knowing that Zoe is intertwined in keeping this horrid secret becomes an epic dilemma.

Xander happened into a good gig at Forrester Creations. Modeling isn’t what he thought his position at the fashion industry leader would result in, but it has and he loves it.

However, Zoe’s duplicity directly impacts Xander’s boss, Hope Spencer (Annika Noelle). If she ever learns that he became part of the coverup of her first-born child’s non-death, Xander can expected to be kicked out of FC, with his career potentially also being ruined.

What should someone do in an instance like this one? If Xander tells what he knows to the interested parties, Zoe will face more than job loss, she could be arrested and spend years in prison. At the very least, she’ll have serious legal problems.

If Xander remains silent, he’ll be furthering a most despicable crime. But Zoe’s father, Reese Buckingham (Wayne Brady), is a hardcore gambler. Whether he’s reformed, or not, won’t change those free will actions on Catalina Island, or the ones where he sold baby Beth to Steffy Forrester (Jacqueline MacInnes Wood) and Taylor Hayes (Hunter Tylo) for a quarter-million bucks.

As B&B fans came to learn, Xander left England because Zoe turned weird. The issue wasn’t fully relationship-based, as much as it was about her mental stability.

Zoe became obsessed with Xander after he broke from her. She chose to follow him to Los Angeles, California. His then romantic link to Emma Barber (Nia Sioux) was just developing. But Zoe rightly determined that Emma wasn’t the right fit for Xander and succeeded in pushing her out.

With trust seemingly restored, Xander’s been pleased. He’s in love with Zoe, which surely serves to complicate whatever decisions he’ll make about the Beth-Phoebe matter moving forward.

Such is trouble in this version of Los Angeles, California. A healthy baby was born, but her parents were lied to. Beth was then sold to pay off gambling debts, which Zoe later learned.

An overheard conversation at work, between Zoe and Flo Fulton-Logan (Katrina Bowden), who agreed to pose as the birth mother Reese needed to secure his scheme, creates this mess. How, or if, Xander responds to the latest predicament Zoe’s drawn him into will produce compelling daytime drama.

How will Xander decide – will he protect Zoe or so the right thing and tell Hope Beth’s alive? There are also B&B spoilers from Brad Bell himself indicating that there will be deaths coming up on The Bold and the Beautiful – could Xander’s knowledge put him at grave risk? CDL is a leading source for everything linked to The Bold and the Beautiful. Check back regularly for B&B spoilers and news!