The Bold and the Beautiful Spoilers: Thursday, May 2 – Flo Decides On Hope’s Job Offer – Xander Quizzes Zoe About Secret

BY hellodrdavis on May 1, 2019 | Comments: one comment
Related : Soap Opera, Spoiler, Television, The Bold and the Beautiful 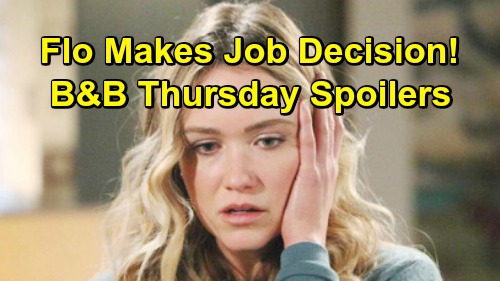 The Bold and the Beautiful spoilers for Thursday, May 2, tease that Xander Avant (Adain Bradley) will grow increasingly worried about his girlfriend Zoe Buckingham (Kiara Barnes). Xander has noticed a big change in Zoe ever since Zoe found out about Reese Buckingham’s (Wayne Brady) baby switch and adoption scam.

Zoe was at first outraged by what her dad did, but her feelings have since grown to be protective of him. She’s deeply worried that Reese will go to prison if the truth about the baby swap ever comes out. And Xander can tell that something is terribly wrong with Zoe. He’s even expressed concern to Hope Spencer (Annika Noelle) about Zoe’s recent behavior,

According to B&B spoilers, Xander and Zoe will have a chat, during which Xander will implore Zoe to lean on him and let him help her. He’ll want her to trust him enough to share what’s going on. He knows there’s something really wrong in Zoe’s life, but he has no idea just how deep Zoe’s trouble is.

Meanwhile, on the new episode of B&B on Thursday, May 2, Florence “Flo” Fulton (Katrina Bowden) will be feeling ambivalent. On the one hand, she just entered into a pact with Zoe and Shauna Fulton (Denise Richards) to keep the baby swap secret between the three of them forever. But then something will happen that will reignite her guilt over the secret.

Flo will encounter Ridge Forrester (Thorsten Kaye). She’ll get to know Ridge, and of course it will be in the forefront of her mind that Ridge is not only Hope’s step-father, but he’s Steffy Forrester’s (Jacqueline MacInnes Wood) dad, too. B&B spoilers say that Ridge will be particularly kind to Flo, and he may express his deep gratitude to her, since he believes that she is Phoebe Forrester’s (Isabella de Armas and Rosalind Aune) birth mom.

Ridge will probably also let Flo know that if she accepts Hope’s offer to work at Forrester Creations, then he’ll welcome her with open arms. After all, she’s family now. The Bold and the Beautiful spoilers say that Flo will experience some serious guilt pangs over the exchange as she tries to decide whether to take Hope up on her offer.