BY Heather Hughes on November 4, 2019 | Comments: one comment
Related : Soap Opera, Spoiler, Television, The Bold and the Beautiful 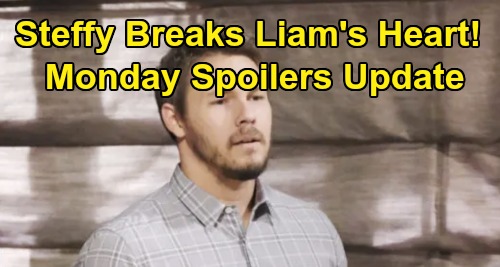 The Bold and the Beautiful (B&B) spoilers update for Monday, November 4, teases that Steffy Forrester’s (Jacqueline MacInnes Wood) curveball will leave Liam Spencer (Scott Clifton) speechless. He’ll falter for a moment when Steffy admits she’s dating again. Since Liam chose to reunite with Hope Logan (Annika Noelle), Steffy’s free to move on as well. There’s no reason why she shouldn’t go on some dates and try to find a love that lasts.

Of course, Steffy recently hinted at wanting another chance with Liam. That’s likely one of the reasons Liam will be so stunned. Jealousy may be another part of it, but Liam will try to keep the green-eyed monster at bay. If this is what feels right to Steffy, Liam might suggest he’s happy for her. The fact that Steffy’s taking steps forward and going after what she wants is great news.

However, Liam might warn Steffy to be careful. The Bold and the Beautiful spoilers say he won’t want Steffy to get her heart broken, so he’ll look out for as best as he can. Liam doesn’t need to overstep here, but he’ll still want Steffy to know he cares.

Steffy probably hasn’t found someone she’s seriously interested in yet, which could work out for Liam. He’s clearly bonding with Steffy again, so “Steam” should ultimately get another shot. Meanwhile, Hope Logan (Annika Noelle) will react to Thomas Forrester’s (Matthew Atkinson) shocking proposal. If Hope expects him to sign the adoption papers, Thomas expects something in return. He wants Hope to stay and make love to him in exchange for his son.

Thanks to this indecent proposal, Hope’s fears about Douglas Forrester (Henry Joseph Samiri) will intensify. It’ll serve as a terrible reminder of what Thomas is capable of. Horrified Hope will think Thomas is disgusting, but she’ll try to hide her disdain. B&B spoilers say she’ll be in panic mode, but she’ll do whatever she can to present a calm demeanor and talk Thomas out of this.

Hope might convince Thomas to at least table the discussion. Then again, Douglas or another character might disrupt their debate. The Bold and the Beautiful spoilers say Hope will wiggle out of this jam for now, but true peril will hit later in the week.

It sounds like some dangerous drama will shake things up! We’ll give you updates as other B&B details emerge. Stay tuned to the CBS soap and don’t forget to check CDL often for the latest Bold and the Beautiful spoilers, updates and news.