The Bold and the Beautiful Spoilers: Monday, September 16 – Ridge Horrified To Wake Up Next To Shauna – Brooke Rushes To Eric

BY hellodrdavis on September 13, 2019 | Comments: 2 comments
Related : Soap Opera, Spoiler, Television, The Bold and the Beautiful 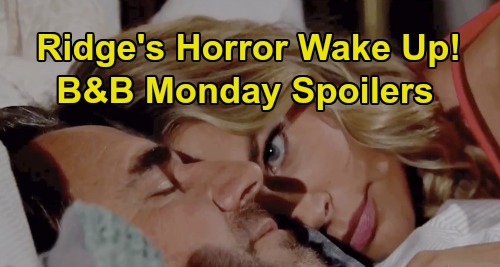 The Bold and the Beautiful spoilers for Monday, September 16, tease that Brooke Forrester (Katherine Kelly Lang) will be completely unnerved. She’ll wake up on the morning after her colossal fight with Ridge Forrester (Thorsten Kaye) and realize that Ridge has been out all night. She’ll be shaken and worried that something might have happened to her husband, and she’ll also be concerned that their marital rift could be beyond repair this time.

Of course, B&B viewers know that Ridge wound up spending the night with Shauna Fulton (Denise Richards) in the bedroom above Bikini Bar. Shauna managed to get Ridge half undressed and tucked into the bed, then she planted a big kiss on Ridge, which he appeared to reciprocate in his drunken state. Finally, Ridge passed out, with Shauna snuggled up next to him and Brooke having no idea where her husband is.

Well, on Monday’s B&B episode, Ridge will wake up with an epic hangover. He’ll be feeling completely miserable physically, and it will probably take him a few moments to realize exactly where he is and why he’s there. But it looks like he’ll soon remember his binge-drinking episode at Bikini Bar, and he’ll realize that he’s in the room above the bar.

But Ridge will be completely horrified when he looks around a bit and realizes that he’s been sleeping next to Shauna all night. He’ll likely have a million thoughts swimming around his head, and given that he probably won’t remember the events of the night before very clearly, he’ll probably wonder whether anything intimate happened between them.

Of course, viewers know that Shauna and Ridge shared a kiss, but it doesn’t appear that anything else happened – unless Shauna tells a different story in the morning. But whether or not anything happened between the two, Ridge will know that he’s got a major problem on his hands, since he’s been away from home all night and Brooke is likely at home worried sick about him.

Speaking of Brooke, she’ll indeed be worried about her husband when she wakes up and realizes that Ridge never came home. She’ll be seriously concerned about him, and all of the worst-case scenarios will go through her mind. According to B&B spoilers, she’ll turn to Eric Forrester (John McCook) for support and comfort. Eric will probably be worried about his son as well, and hopefully will be able to calm Brooke down a bit as she continues to worry.