The Bold and the Beautiful Spoilers: Steffy Gets Off Liam Merry-Go-Round – New Love Coming, Good Things Come to Those Who Wait 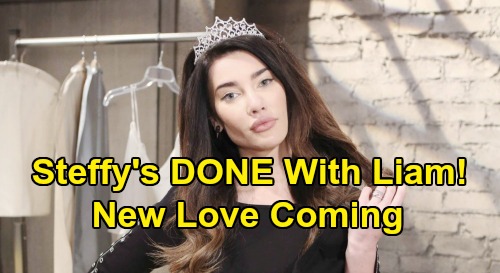 The Bold and the Beautiful (B&B) spoilers tease that Steffy Forrester (Jacqueline MacInnes Wood) will fight for a better future. B&B fans know Steffy’s been through a lot thanks to Dr. Reese Buckingham (Wayne Brady), Florence “Flo” Fulton (Katrina Bowden) and all the other characters who joined the secret circle. Even Steffy’s own brother, Thomas Forrester (Matthew Atkinson), was part of the betrayal.

Now Steffy’s down, but she’s not out. She’ll hopefully be able to remain in Beth Spencer’s (River Davidson and Madeline Valdez) life in time, and she’ll continue to raise Kelly Spencer (Zoe Pennington) as well. The Bold and the Beautiful spoilers say Steffy will make great strides in her career as well. She’ll become quite the decision-maker around Forrester Creations in the months ahead.

Steffy is perhaps a bit jaded at this point, but good things are undoubtedly in her future. She’ll have a chance to rise from the ashes and build a better life. Steffy’s a take charge kind of gal, so that’s exactly what she’ll do. She’ll take charge of her own future and where she’s headed next. That means Thomas will have a fight on his hands when he pushes for more power at Forrester.

Steffy may also have some mini Hope Logan (Annika Noelle) battles along the way. However, the show’s seemingly made it clear that they’re going with “Lope” for a while. Liam Spencer (Scott Clifton) will inevitably waffle again eventually, but it becomes ridiculous if he does it too often. Steffy should be on her own for a while, but that could be beneficial as she sorts through her feelings and decides what she wants.

The Bold and the Beautiful spoilers say Steffy may find a greater sense of purpose this fall. She’ll face more turmoil thanks to Thomas, but all of this could lead to overcoming her struggles and setting up a solid love story. Based on the latest info and clues, Steffy seems poised to put Liam behind her for now.

Since most B&B characters don’t stay single for too long, could a new guy walk into her life when she least expects it? Maybe they’ll do a “new year, new man” situation as we head into 2020. We’ve still got a few months left of 2019, but that’ll give Steffy the time she needs to truly cope with the loss of “Phoebe Forrester” and move on.

Are you excited to see what the future holds for Steffy? We’ll give you updates as other B&B news comes in. Stay tuned to the CBS soap and don’t forget to check CDL often for the latest Bold and the Beautiful spoilers, updates and news.