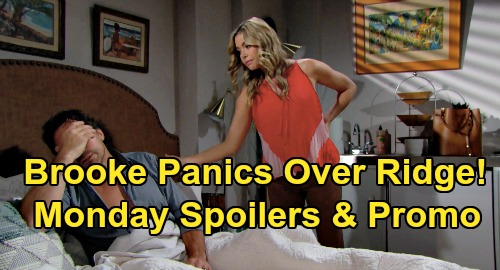 The Bold and the Beautiful (B&B) spoilers update for Monday, September 16, tease that Brooke Forrester (Katherine Kelly Lang) will wake up to some upsetting news. She’ll take a look around and realize Ridge Forrester (Thorsten Kaye) stayed out all night. He never came home after that brutal fight, which sent him storming out of the house and off to Bikini Bar.

Of course, that’s where Ridge got wasted and had to be hauled up to a room for crashing. Shauna Fulton (Denise Richards) was happy to help Ridge partially disrobe and gave him a kiss as she cozied up to him. The Bold and the Beautiful spoilers say Ridge will awaken to a surprise of his own – and it won’t be a good one. He’ll panic when he realizes he’s in bed next to Shauna, which will lead to confusion and questions.

Ridge will only recall a few bits and pieces from the night before. He’ll have a massive hangover, so that won’t make it any easier to recall what went down. B&B fans can expect Ridge to worry about what exactly happened with Shauna, but she’ll probably offer reassurance. Shauna may assure Ridge that no sex occurred and promise to keep her mouth shut.

Even though the evening was fairly innocent, Ridge will know he shouldn’t have been in the same room with Shauna all night. That kiss she planted wouldn’t go over well with Brooke either. Ridge will agree that they should just keep the matter between them, so they’ll make a pact and move on. They’ll plan to never speak of this strange predicament ever again.

Back with Brooke, she’ll need someone to lean on as her mind swirls with awful possibilities. Brooke won’t have a clue where Ridge is or where he’s been. She’ll have no way of knowing if Ridge is even safe and alive, so she’ll be a big bundle of emotions. Thankfully, The Bold and the Beautiful spoilers say Eric Forrester (John McCook) will settle Brooke down. She’ll turn to Eric for support, so he’ll step up to make sure she’s OK.

It sounds like some exciting scenes are coming up. We’ll give you updates as other B&B details emerge. Stay tuned to the CBS soap and don’t forget to check CDL often for the latest Bold and the Beautiful spoilers, updates and news.

Risk takers, heartbreakers, and home-wreckers – it’s all coming up this week on #BoldandBeautiful! pic.twitter.com/rX1bitRHxv