BY hellodrdavis on August 30, 2019 | Comments: one comment
Related : Soap Opera, Spoiler, Television, The Bold and the Beautiful 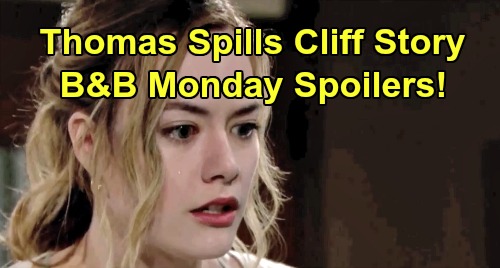 The Bold and the Beautiful spoilers for Monday, September 2, tease that Brooke Forrester (Katherine Kelly Lang) will find herself quite nervous. As B&B viewers know, Thomas Forrester (Matthew Atkinson) has just regained consciousness after his fall over the cliff at Steffy Forrester’s (Jacqueline MacInnes Wood) house. He awakened to Hope Logan’s (Annika Noelle) voice, as she was berating him for his actions and urging him to wake up.

Of course, now that Thomas is back with the living, he’s going to have some serious questions to answer. Detective Alex Sanchez (Jeremy Ray Valdez) is right there and wants to hear Thomas’ account of how he wound up at the bottom of the cliff. Brooke’s fearfully standing there, not knowing what Thomas will say. Will he throw Brooke under the bus and claim that she intentionally pushed him? Or will his perception be that the whole thing was just a terrible accident?

Well, since ongoing B&B spoilers don’t indicate that Brooke is going to get hauled off to the police station, it looks like Thomas will support Brooke’s account of events – that she pushed him with the intent of getting him away from Hope, not with the intent of pushing him over the cliff to his likely death. That will be good news for Brooke in a legal sense, but it looks like that’s not going to help Brooke’s relationship with Ridge Forrester (Thorsten Kaye).

Rather, ongoing B&B spoilers say that Ridge will turn a cold shoulder to Brooke. She might be cleared legally, but he’s going to have a hard time getting past what he saw, which was his son falling over the cliff right after Brooke pushed him in anger. He’s going to have a difficult time dealing what that fact, and Brooke and Ridge’s marriage is going to be tested like never before.

Meanwhile, on the new episode of B&B on Monday, September 2, Sally Spectra (Courtney Hope) and Wyatt Spencer (Darin Brooks) will find themselves reminiscing about old times. As B&B viewers know, these two are on the road to reconciliation, and Sally was really happy to hear Wyatt defending her and professing his deep feelings for her to Quinn Forrester (Rena Sofer). The two then made some plans to spend some time together over the weekend and sealed the date with a nice kiss.

Well, it seems that “Wally” will spend some more time together on Monday’s episode. According to B&B spoilers, the two will enjoy their time reconnecting, and as they are reminiscing about their past together, they’ll unexpectedly wind up in a passionate kiss. It will just seem like a natural progression of their closeness and their conversation.

From there, the pair will get playful with each other, and it looks like they’ll thoroughly enjoy their time together. For Sally and Wyatt, this will be like a do-over in the best possible sense. Sally knows that Wyatt has been through a lot of betrayal and hurt with Flo Fulton (Katrina Bowden), and she’s trying to be a good friend to Wyatt and someone he can trust again.

And Wyatt will want Sally to feel special and not like a “rebound” or his second choice. In actuality, Sally was Wyatt’s first choice, and he’ll want to be sure that she knows that. It should be cute to watch him try to instill that feeling in Sally, and Sally will surely enjoy watching him try.