The Bold and the Beautiful Spoilers: Dying Will Survives Through Flo’s Lifesaving Donation – Redemption for Lying Fake Birth Mom? 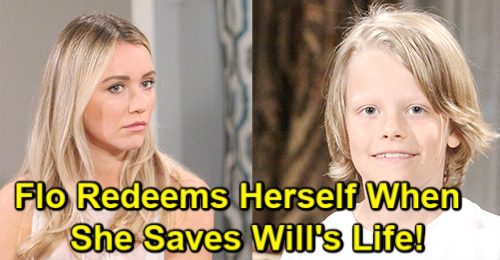 The Bold and the Beautiful (B&B) spoilers tease that Florence “Flo” Fulton (Katrina Bowden) needs a path to redemption. B&B probably doesn’t have plans to lock Flo up and throw away the key – especially since Flo isn’t going to give up on Wyatt Spencer (Darin Brooks). Some jealousy will definitely emerge once Flo makes bail and sees Wyatt growing closer to Sally Spectra (Courtney Hope) again.

Of course, we should point out that B&B is already trying to brush Thomas Forrester’s (Matthew Atkinson) behavior under the rug. Just because Thomas had a moment of clarity toward the end doesn’t mean we can just forget all the horrible things he did. Brooke Forrester (Katherine Kelly Lang) is almost being painted as the villain now when Thomas is the one who’s been a vicious, threatening menace.

Having Thomas merely be sorry for his actions doesn’t seem good enough, but time will tell how The Bold and the Beautiful writers will handle it. As for Flo, perhaps she’ll get an actual redemption arc. There’ll be a good opportunity coming up thanks to a tragic twist of fate for Bill Spencer (Don Diamont) and Katie Logan (Heather Tom).

Will Flo Fulton Follow In Her Father Storm Logan’s Footsteps?

Bill has made it clear that lying Flo should pay for what she’s done. Katie is also outraged with Flo, so it’d be smart to include the fake birth mom here for drama’s sake.

We should also think about what tragedy might hit Katie and Bill hard. An accident that results in serious injury or a sudden illness for Will Spencer (Finnegan George) seems likely.

Could Flo play a role in helping Will survive? Don’t forget that Flo is a Logan just like Katie! Storm Logan (William deVry) was Flo’s father, and he saved Katie’s life by killing himself to give her his heart.

Saving Wyatt Spencer’s Brother Would Score Points With Him

Flo obviously won’t be doing anything that extreme, but what if she’s the only match for some lifesaving donation? This could be Flo’s ticket to redemption since everyone will want to see Will pull through.

Saving Wyatt’s little brother would certainly earn some points with him, too. The puzzle pieces fit, so we wouldn’t be surprised if Flo goes from a villain to a hero. The Bold and the Beautiful spoilers say some hot drama’s ahead no matter what, so stay tuned.