BY hellodrdavis on August 29, 2019 | Comments: one comment
Related : Soap Opera, Spoiler, Television, The Bold and the Beautiful 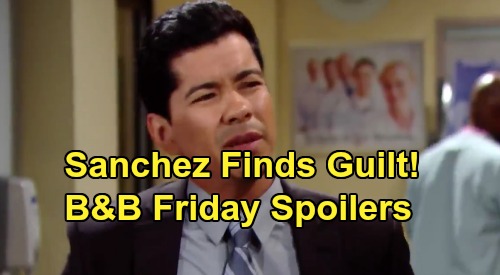 The Bold and the Beautiful spoilers for Friday, August 30, tease that Brooke Forrester (Katherine Kelly Lang), Ridge Forrester (Thorsten Kaye), and Hope Logan (Annika Noelle) will be on the hot seat. As B&B viewers know, Detective Alex Sanchez (Jeremy Ray Valdez) just arrived at the hospital after a visit at the jail with Flo Fulton (Katrina Bowden).

Flo was sure to implicate Thomas to Detective Sanchez, and shortly thereafter, he got a call about Thomas Forrester’s (Matthew Atkinson) fall over the cliff at Steffy Forrester’s (Jacqueline MacInnes Wood) house.

Now Detective Sanchez is trying to get to the bottom of what happened on the side of the cliff before Thomas’ fall, and Hope and Liam Spencer (Scott Clifton) are scrambling to answer questions without implicating Brooke in the matter. Ridge has been awfully silent so far, and Detective Sanchez has just asked him about what he saw, since he was a witness to Thomas’ fall.

On Friday’s episode, look for Detective Sanchez to continue pummelling everyone with questions about what happened. He’s just put two and two together and realized that both Hope and Brooke were likely very angry with Thomas over all of the horrible things that he’s done recently. Plus, he witnessed Brooke in Thomas’ room looking awfully guilty, so he probably already has a good idea about what likely happened. Now, it will just be a matter of getting the truth out of everybody.

But what will Ridge ultimately tell Detective Sanchez? He likely has very mixed feelings about the whole thing. He saw Brooke push Thomas, and he knows that Brooke has deep-seated animosity toward his son, but of course he can only guess at what was going through Brooke’s head at the time. Chances are, he’ll stick to the facts and simply describe what he saw, thinking that that will be enough, and Detective Sanchez can reach his own conclusions.

Well, of course, he’ll want to eventually talk to Thomas, who, according to B&B spoilers, will wake up and talk with Detective Sanchez. That will leave Brooke seriously worried, as she’ll wonder about what Thomas’ take on the whole situation will be.

Will Thomas turn against Brooke and use the opportunity to bury his stepmom in a world of legal trouble? Or will he simply say that he lost his footing and the fall was accidental?

Meanwhile, on the new episode of B&B on Friday, August 30, look for the Forrester, Logan, and Spencer families to rally as they wait and wonder about whether Thomas is going to survive.

Fortunately, B&B spoilers indicate that Thomas will wake up, but his physical condition going forward isn’t entirely clear. He may have a serious recuperation period to go through, but otherwise it looks like he’ll eventually be ok.

But in the meantime, look for everyone to pull for Thomas. Sure, nobody is happy with the things Thomas has done, but they want him to get better, face the consequences of his actions, and put his life back together. Plus, everyone is worried for Douglas Forrester (Henry Joseph Samiri), whom they won’t want to lose yet another parent. Look for the families to come together and pray for the best in this tragic situation.