The Bold and the Beautiful Spoilers: Week of September 2 – Bill Fights for Brooke – Ridge Demands Emma Answers From Flo

BY Heather Hughes on August 29, 2019 | Comments: one comment
Related : Soap Opera, Spoiler, Television, The Bold and the Beautiful 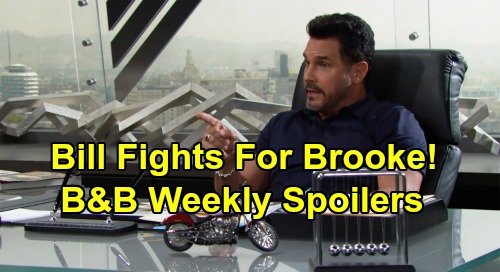 The Bold and the Beautiful (B&B) spoilers for the week of September 2-6 reveal that some surprising moments are on the way. First, let’s talk about the first signs of Wyatt Spencer (Darin Brooks) and Sally Spectra’s (Courtney Hope) romantic reunion. Wyatt already delivered a heartfelt apology to Sally, so we all knew it was just a matter of time until things got steamy between them again.

The next time they’re together, their conversation will lead to kiss that’s both sweet and passionate. They won’t see it coming, but they certainly won’t mind. Afterward, Wyatt and Sally will enjoy some familiar banter. They’ll tease each other as they settle into to some familiar feelings. It sounds like the “Wally” reconnection will be moving right along.

Over with Thomas Forrester (Matthew Atkinson), he’ll get grilled by Detective Alex Sanchez (Jeremy Valdez) after he awakens. The detective will want to hear Thomas’ side of the story, so Brooke Forrester (Katherine Kelly Lang) will definitely be sweating bullets. It looks like Thomas will simply tell what happened, which was that he tried to apologize to Hope and got shoved away by Brooke.

Of course, no one knows how Thomas will treat Brooke in this story. It doesn’t seem like Thomas will accuse her of attempted murder, but his version of events won’t exactly make Brooke look good either. Regardless, Brooke will be appalled when Ridge stands by his anger toward her. He’ll insist Brooke set out to shove Thomas over that cliff, but she’ll maintain that wasn’t the case.

In jail, Shauna Fulton (Denise Richards) will pay Florence “Flo” Fulton (Katrina Bowden) another visit. When she hears all the latest Thomas and “Bridge” developments, Flo will be horrified. She’ll realize their deception snowballed into something far worse than she ever could’ve imagined.

The Bold and the Beautiful spoilers say Flo will feel terrible, but she’ll feel even worse after Ridge shows up. He’ll be incensed as he seeks answers from Flo, so this may involve Thomas’ previous behavior. Since Brooke will be so adamant that Thomas was dangerous, he’ll want more info on Flo’s perspective and how Thomas fits in Emma Barber’s (Nia Sioux) crash.

However, Ridge will continue to loathe Flo for what she’s done. He’ll want Flo to know that he’ll see to it that she pays. Elsewhere, a distraught Brooke will confide in Bill Spencer (Don Diamont). Once he hears the latest news in the cliff drama, B&B spoilers say Bill will seek out Thomas. He’ll probably try to threaten Thomas into talking to Detective Sanchez again and making things right.

If nothing else, Bill will want Thomas to realize he’s coming for him. He’ll indeed go after Thomas by searching for incriminating evidence in the Emma case. While the Logan sisters support Brooke, Ridge will get rattled by this Emma investigation. It’ll lead to his own interrogation of Thomas and a fierce outburst over his son’s role in the accident.