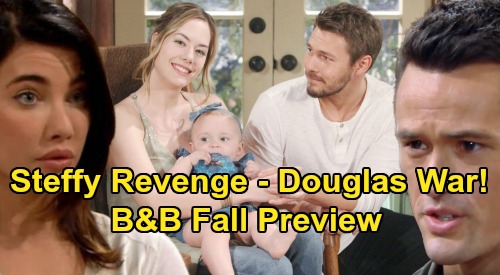 The Bold and the Beautiful (B&B) spoilers tease that some exciting drama’s ahead. It’s never too early for a juicy sneak peek, so let’s look at what’s still to come in the baby swap aftermath. Here’s a preview of all the action happening this fall.

For starters, let’s talk about Thomas Forrester (Matthew Atkinson). The Bold and the Beautiful spoilers say there’ll be plenty of opinions on what Thomas deserves. Some B&B characters will fight for Thomas to be punished, especially since he’ll be connected to Emma Barber’s (Nia Sioux) death and become an official suspect.

Bill Spencer (Don Diamont) and Justin Barber (Aaron D. Spears) will naturally lead the charge against Thomas. Of course, Ridge Forrester (Thorsten Kaye) will find himself in a tight spot. He’ll be disappointed by his son’s behavior, but he still won’t think Thomas is a monster. The Bold and the Beautiful spoilers say Ridge will do his best to navigate this tricky father territory.

What’s best for Douglas Forrester (Henry Joseph Samiri) will also be an important theme this fall. Liam Spencer (Scott Clifton) and Hope Logan (Annika Noelle) will want to make sure Douglas is in a safe, loving home. Thomas hasn’t proven he can provide that lately, but he’ll fight to keep his boy.

As for Brooke Forrester (Katherine Kelly Lang), she’ll side with Liam and Hope on the Douglas issue. She’ll also face even more problems with Ridge, who’ll be busy trying to support Steffy Forrester (Jacqueline MacInnes Wood) as well. Steffy will continue to struggle with the loss of “Phoebe Forrester,” who is actually Beth Spencer (River Davidson and Madeline Valdez).

However, Steffy won’t let this period of mourning drag her down. She’ll try to channel her frustration into something positive and throw herself into work at Forrester Creations. Some big things will happen for Steffy career-wise. She’ll fight for more control and potentially butt heads with Hope, who’ll have to make some choices of her own about the Hope for the Future line. Will Steffy’s business moves appear to be motivated by revenge?

Other Bold and the Beautiful spoilers say Florence “Flo” Fulton (Katrina Bowden) will continue to be loathed by most of the canvas. While Flo waits to learn her ultimate fate, Sally Spectra’s (Courtney Hope) love for Wyatt Spencer (Darin Brooks) will reignite. She’ll be a bit wary due to how Wyatt dumped her so quickly, but the heart wants what it wants.

Finally, Bill and Katie Logan (Heather Tom) will face a tragic, life-threatening situation. There’s a good chance Will Spencer (Finnegan George) will be at the center of this shocking storyline. Katie and Bill’s relationship will definitely be tested as they suffer through this crisis.

That’s it for your fall preview! We’ll give you updates as other B&B news comes in. Stay tuned to the CBS soap and don’t forget to check CDL often for the latest Bold and the Beautiful spoilers, updates and news.