BY Marcy Cohen on April 18, 2019 | Comments: one comment
Related : Soap Opera, Spoiler, Television, The Bold and the Beautiful 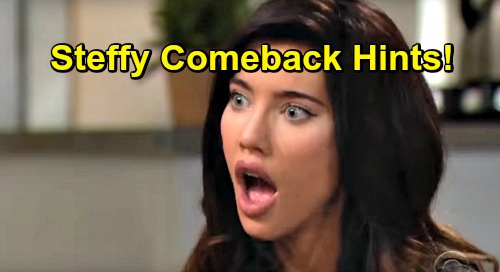 The Bold and the Beautiful (B&B) spoilers reveal that one CBS soap character is desperately needed on canvas. B&B fans know Steffy Forrester (Jacqueline MacInnes Wood) is currently offscreen due to Wood’s maternity leave. She’s been busy enjoying her newborn son, Rise, but when will she reprise her role as Steffy?

There’s no official word yet on when Wood might start filming again, but some hints have surfaced. For starters, Wood had an interesting comment in a recent Instagram post. She put up a pic of herself resting with Rise and the family dog. The caption said, ““When you realize you need a refresher on nursery rhymes…. Hush little baby don’t you cryyyy.. uhhh .. Mama’s gonna take you to Hollywood and Vine … “

That alone doesn’t say Wood is ready to come back, but at least she’s got Hollywood on the brain! Maybe it won’t be long until Wood wants to split her Mommy time with Steffy time. Of course, Steffy is a mom as well – and that’ll be a huge part of why the character ultimately comes back. Steffy’s return story will inevitably focus on “Phoebe Forrester” (Isabella de Armas).

Kelly Spencer (Zoe Pennington and Chloe Teperman) will be part of this as well as since she’s Liam Spencer’s (Scott Clifton) daughter and “Phoebe’s” sister. Although no one can confirm an exact date for Wood’s comeback, we’re starting to see the reason why it may ultimately happen. Steffy doesn’t intend to stay out of the country forever anyway, but her return trip may still be forced.

The Bold and the Beautiful has give some clues about this through Brooke Forrester (Katherine Kelly Lang), who’s wondering if the Logan news changes anything for Flo. Will Steffy eventually come home to deal with custody chaos? That’d give her a great storyline to play right off the bat during her next stint.

Flo certainly wouldn’t want to rip “Phoebe” out of Steffy’s arms and cause pain for another mother. Steffy’s joy is the one part of all this that Flo can take comfort in. However, Brooke is relentless. Steffy may ultimately feel the need to come home and put Brooke in her place.

When you realize you need a refresher on nursery rhymes…. Hush little baby don’t you cryyyy.. uhhh .. Mama’s gonna take you to Hollywood and Vine … 🤦🏻‍♀️ #helpmehhh