BY Heather Hughes on November 10, 2019 | Comments: one comment
Related : Soap Opera, Spoiler, Television, The Bold and the Beautiful 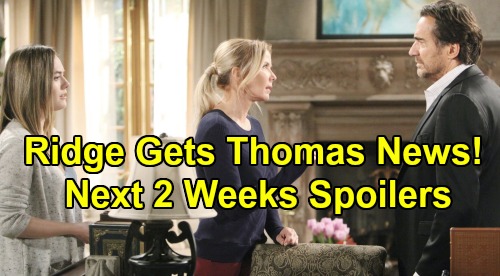 The Bold and the Beautiful (B&B) spoilers for the next two weeks tease that some shockers and shakeups are brewing. During the week of November 11-18, Thomas Forrester’s (Matthew Atkinson) fate will leave Hope Logan (Annika Noelle) reeling. After a desperate search ends in failure, Hope will fear she’s the reason Thomas is dead. She’ll assume his body was eaten up in the acid vat.

Brooke Forrester (Katherine Kelly Lang) will be shocked once Hope brings her up to speed. She’ll think Hope was just protecting herself and shouldn’t be held at fault. Of course, Hope will also offer the news that Thomas signed the adoption papers. Brooke will feel like that’s the one bright spot in all this, but Ridge Forrester (Thorsten Kaye) will be livid over Hope’s manipulation.

The Bold and the Beautiful spoilers say Brooke will try to play peacemaker as Ridge blasts Hope. He’ll be furious over Thomas’ signing the papers and giving Hope custody rights. Brooke will do her best to calm Ridge down, but she won’t mention anything about Thomas’ presumed death.

Steffy Forrester (Jacqueline MacInnes Wood) will have some strong words against Brooke in the week ahead. She’ll tell Ridge what she thinks Brooke’s capable of, which will set up that confrontation we mentioned. Ridge may mostly blame Hope, who actually carried out the plan. Even so, Brooke’s going to face some backlash for her own role in the plot.

Later, Liam Spencer (Scott Clifton) will be taken aback to learn Hope’s officially Douglas Forrester’s (Henry Joseph Samiri) mother. Hope will also find out that Liam’s resigning from Forrester Creations and is headed back to Spencer Publications. Things will be awkward between them since they’re not communicating very well these days.

Liam and Steffy, on the other hand, are getting along splendidly. They’ll continue to open up to each other and connect, which could spell trouble “Lope’s” relationship. B&B fans can expect Liam to make a pact with Steffy. They’ll enjoy this family time they’ve been having with the girls, so they’ll vow to keep doing it.

Steffy and Liam will think it’s important for Kelly Spencer (Zoe Pennington) to bond with her sister, Beth Spencer (River Davidson and Madeline Valdez). They’ll like the fact that they’re bonding as co-parents, too. Liam and Steffy could be bonding as more than that soon if they keep having all these tender moments.

Back with Ridge, he’ll want answers about what really happened with Thomas. During the week of November 18-22, Ridge will be stunned to hear about Thomas’ pushing Hope to make love. It looks like Ridge will believe Hope’s side of the story, but she’ll be leaving out a crucial detail! Hope won’t mention the shove that knocked Thomas into the deadly acid vat.

Over with Steffy again, she’ll wonder what’s up when Thomas doesn’t answer her attempts to contact him. The longer Thomas is missing, the more nervous Steffy will get. There’s a good chance Steffy will wind up confiding in Liam eventually. It could put Hope in a tight spot as Liam grows increasingly curious.