BY Heather Hughes on December 1, 2019 | Comments: one comment
Related : Soap Opera, Spoiler, Television, The Bold and the Beautiful 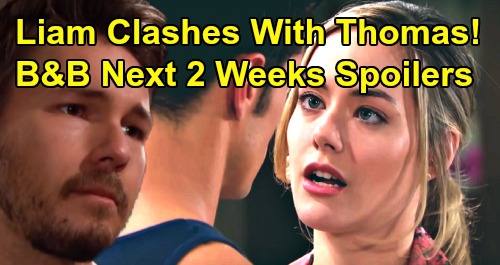 The Bold and the Beautiful (B&B) spoilers for the next two weeks tease that some stunning moments are on the way. For starters, Ridge Forrester (Thorsten Kaye) will be caught off guard by Shauna Fulton’s (Denise Ridge) love declaration. It’ll be a lot for Ridge to wrap his head around, but he won’t mind Shauna having deep feelings for him. Ridge will kiss Shauna passionately – and Quinn Forrester (Rena Sofer) will notice.

After spying on Shauna and Ridge, Quinn will push her bestie to spill all the deets. When Quinn realizes Ridge and Brooke Forrester (Katherine Kelly Lang) are over, she’ll be both excited and worried for Shauna. Quinn will warn that Brooke is the love of Ridge’s life, but Shauna will think it’s time for a new one. She’ll be pleased when Quinn offers her approval and advises her to go get him!

Ridge will end up taking divorce papers to Brooke later and making one last plea. He’ll urge Brooke to forgive Thomas Forrester (Matthew Atkinson), but she won’t be willing to do that. Brooke will have a counteroffer for Ridge to consider, but he won’t be interested in anything except another chance for his son.

As for Thomas, he’ll get blasted for everything that went down at Forrester Creations. Ridge and Steffy Forrester (Jacqueline MacInnes Wood) will scold Thomas for his treatment of Hope Logan (Annika Noelle), but they’ll also wonder why in the world he would sign over joint custody rights. Thomas will have to defend his decision and try to get his family to accept this.

Afterward, Steffy will make her way over to confront Hope. The Bold and the Beautiful spoilers say they’ll have an explosive fight about Hope’s decision to cover up Thomas’ death. The Douglas Forrester (Henry Joseph Samiri) custody issue will be part of this faceoff. Of course, Steffy’s pain over losing “Phoebe Forrester” aka Beth Spencer (River Davidson and Madeline) will be underneath the conflict.

We should point out that due to the impeachment hearings coverage and the preemptions they caused, Thanksgiving will be celebrated during the week of December 2-6. Some fans out there were disappointed that there wasn’t a turkey day episode, but it’s still coming! It’s just a little late this year.

Other B&B spoilers say Thomas will clash with Liam Spencer (Scott Clifton) and realize he has to step up his efforts. He’ll be more determined than ever to win Hope over. Thomas will use Douglas as part of his next round of manipulation. The kid will somehow be used to coax Hope into working with Thomas on the Hope for the Future line.

During the week of December 9-13, Ridge and Brooke won’t be able to get on the same page. It sounds like those divorce papers will be signed, so Thomas will have a reason to gloat. After making Steffy mad with a previous celebration, he’ll secretly revel in Ridge’s tough decision to end his marriage. Thomas may pretend he’s sorry during a chat with his dad, but he’ll definitely be ecstatic over the news.

As for Hope, she’ll have to make a tough decision of her own. Thomas will keep revving up the pressure when it comes to working together. He’ll think they could make big things happen for Forrester Creations. Thomas will naturally count on this drawing Hope closer as well. Hope’s bound to cave in sooner or later, so Thomas will have a shot at proving himself.