The Bold and the Beautiful Spoilers Next 2 Weeks: Steffy Confides in Sally About Liam – Hope Doubts Thomas’ New Love – Zoe’s a Traitor 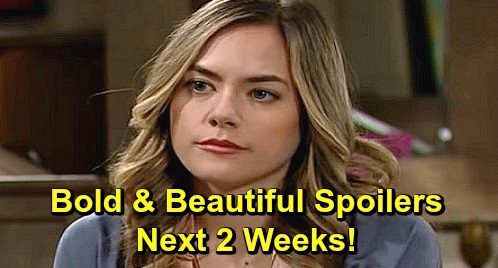 The Bold and the Beautiful (B&B) spoilers for the next two weeks tease that some shockers are on the way. During the week of December 16-20, Steffy Forrester (Jacqueline MacInnes Wood) and Liam Spencer (Scott Clifton) are in for a surprise. They’ll be on the hunt for Vincent “Vinny” Walker (Joe LoCicero) when they run into Zoe Buckingham (Kiara Barnes).

Liam and Steffy will decide to shift their strategy. Instead of grilling Vinny about Thomas Forrester (Matthew Atkinson) and running the risk of getting stonewalled, they’ll interrogate Zoe instead. Steffy and Liam may hope they can guilt-trip Zoe into coughing up Thomas details. She’s frustrated with Thomas anyway since he hasn’t delivered on his promises yet, so she’ll indeed spill all the deets.

After Zoe’s dirt convinces Liam they’re hot on Thomas’ trail, he’ll push Zoe to keep helping them. Steffy will agree that Zoe could be a valuable asset. They’ll ask Zoe to serve as a double agent in their plan to expose Thomas’ schemes. B&B spoilers say Zoe will use this opportunity to seek a deal with Steffy. She’ll offer a sincere apology for her baby swap deception and hope she can return to work at Forrester Creations.

Since that would put Zoe closer to Thomas and in the prime position to assist them, Steffy will quickly get on board. However, Thomas will form a plan of his own – and involves using Zoe to make Hope Logan (Annika Noelle) jealous. He’ll set up a romantic dinner and invite Hope over so that she’ll assume it’s for her. After Hope takes the bait and flies off the handle, Thomas will insist it’s not what Hope thinks.

Hope will be shocked when Thomas assures Hope that he’s moving on. He’ll reveal that this romantic setup is for Zoe, not Hope. The Bold and the Beautiful spoilers say Hope will wonder if Thomas’ is being sincere or playing games. She’ll find it tough to read Thomas, but Hope and Steffy will feel certain this is just more of Thomas’ manipulation.

However, Hope will eventually decide that maybe Thomas really has given up on her. Since there’ll be no other worthy designer available, Hope will decide to work with Thomas after all. He’ll be thrilled and will privately declare that Hope will be his soon. Thomas will expect the remaining pieces of his plot to fall into place.

As for Liam, he’ll move on to the next phase of Thomas’ takedown. Liam won’t love the idea of Hope and Thomas working together, but he’ll try to tell himself it’s only temporary. Over with Brooke Forrester (Katherine Kelly Lang), she’ll get a visit from a desperate Ridge Forrester (Thorsten Kaye). Ridge doesn’t want to end their marriage any more than Brooke does, but they’re struggling to get on the same page.

Nevertheless, Ridge will offer Brooke one more chance to fix this. He’ll think there has to be a way to save their relationship, but it just doesn’t seem to be in the cards right now. If Ridge still expects Ridge to forgive Thomas, it’s not going to happen.

As for Steffy, she’ll face backlash over her decision to rehire Zoe. Brooke will show up to rant at Steffy, but she’ll be taken aback to learn Zoe’s actually part of Thomas’ downfall team. Unfortunately, Zoe’s resolve will waver during the week of December 23-27. She’ll make matters incredibly complicated when she takes a big step with Thomas. Does that mean Zoe will land in bed with him?

Regardless, Steffy and Liam may not be too happy if their team player becomes a traitor! Zoe could easily let herself fall too hard and play them for fools. In the meantime, Steffy will have a confession to make. She’ll open up to Sally Spectra (Courtney Hope) and make a major admission about Liam.

It seems likely this will involve Steffy’s feelings for Liam. She may admit she’s still in love with her ex and wants to get back together. The Bold and the Beautiful spoilers say Steffy will get some guidance and ponder the future, so stay tuned. We’ll give you updates as other B&B news comes in. Stick with the CBS soap and don’t forget to check CDL often for the latest Bold and the Beautiful spoilers, updates and news.