The Bold and the Beautiful Spoilers Next 2 Weeks: Steffy’s Next Round of Drama – Desperate Kidney Hunt for Katie – Thomas Seeks an Ally 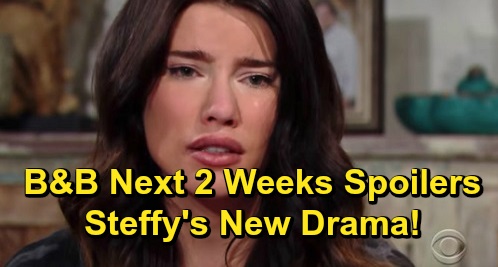 The Bold and the Beautiful (B&B) spoilers for the next two weeks tease that some stunning moments are ahead. First, let’s talk about Thomas Forrester’s (Matthew Atkinson) manipulation. After declaring war on the Logans, Thomas will get some information that could sink Ridge Forrester’s (Thorsten Kaye) marriage to Brooke Forrester (Katherine Kelly Lang). He’ll gladly take advantage of it and hope “Bridge” burns to the ground.

Thomas will manipulate Danny (Keith Carlos) into spilling the Shauna Fulton (Denise Richards) beans to Brooke. The bartender will fill Brooke in on Ridge’s night with Shauna, so it won’t be long until Brooke confronts her husband. Ridge will be taken aback when he realizes his secret is out. He’ll scramble to explain, but the fact that he deceived Brooke will certainly work against him. It’ll look like Ridge had something to hide.

While Ridge deals with Brooke’s fury, Shauna will face Bill Spencer’s (Don Diamont) wrath at the hospital. It seems she’ll pop in and check on Katie Logan (Heather Tom), but Bill won’t appreciate the gesture. He’ll make it crystal clear that Shauna isn’t welcome and never will be. Bill will want Shauna to keep her distance from the Logan women at all times. The same goes for Florence “Flo” Fulton (Katrina Bowden).

Speaking of Flo, she’ll eventually get a confession from her mom. Shauna will open up about the details of her night with Ridge – including the fact that she kissed him while he was plastered. Flo will sense that Shauna’s becoming obsessed and she won’t like it. Unfortunately, Flo’s repeated warnings won’t accomplish anything. Shauna will only grow more determined to make Ridge her man.

Later, Thomas will offer Shauna some help with her goal, but he’ll want her help in return. B&B fans know they both have a motive to destroy “Bridge.” Thomas will think they should team up to make it happen. He’ll feel confident two heads will be better than one when it comes to ending Ridge and Brooke’s relationship for good.

Shauna will have a tough decision to make. She could lose her chance to be with Ridge if she gets caught, so joining forces with Thomas would be risky. Over with Liam Spencer (Scott Clifton), he’ll promise Hope Logan (Annika Noelle) that they’re going to protect Douglas Forrester (Henry Joseph Samiri). Hope’s concerns will rev up, so Liam will let her know they’re going to fight for the boy and make sure Thomas stays away.

Back with Ridge, he’ll try to play peacemaker with Thomas and Steffy Forrester (Jacqueline MacInnes Wood). Ridge won’t want his family to completely fall apart, so he’ll try to salvage the broken pieces. He’ll make some big changes in hopes of repairing the extensive damage that was done.

Over with Katie and Will Spencer (Finnegan George), they’ll get a little moment to bond. The Bold and the Beautiful spoilers say things will seem bleak and scary for the kid, but he’ll try to hang in there. Will’s going to hold out hope that Katie will pull through her medical crisis.

Afterward, Bill will deliver some updates on the hunt for Katie’s kidney match. Sadly, they won’t have one yet, but Bill will make a vow soon enough. During the week of October 7-11, Bill will reassure his love. He’ll promise Katie this won’t be the end for them and count on a miracle kidney donor to appear.

Will Flo be the donor? It seems likely since B&B’s trying to redeem her and she needs a way to make headway with the Logan clan. Katie will be deteriorating quickly, so let’s hope she gets the kidney she needs ASAP.

Other Bold and the Beautiful spoilers say Brooke will give Shauna a stern warning. She’ll insist that her rival needs to steer clear of Ridge, but Shauna won’t listen. Instead, she’ll just wind up provoking Brooke and perhaps kicking off a major catfight.

It sounds like the next two weeks will be packed with drama, so don’t miss all the action. We’ll keep you posted as other B&B news comes in. Stay tuned to the CBS soap and don’t forget to check CDL often for the latest Bold and the Beautiful spoilers, updates and news.