The Bold and the Beautiful Spoilers: Steffy and Thomas War Heats Up – Ridge Tries to Repair Family Damage 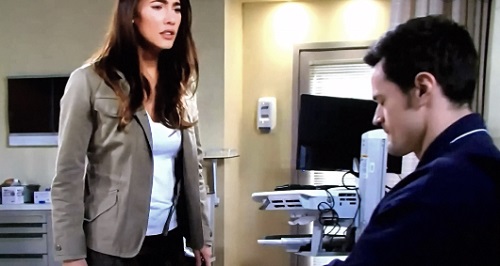 The Bold and the Beautiful (B&B) spoilers tease that Ridge Forrester (Thorsten Kaye) will want to repair his family. B&B fans know Ridge loves both Steffy Forrester (Jacqueline MacInnes Wood) and Thomas Forrester (Matthew Atkinson). Unfortunately, there’s some conflict between them and Ridge is stuck in the middle. He’ll want to find a way forward with his kids during the week of September 30-October 4.

Ridge knows Thomas hurt Steffy and many other people with his deception. However, he genuinely believes Thomas is sorry for his mistakes and wants to be a better man. Ridge may want Steffy to see that as well, but she’ll probably put up a fight on reconciliation. She can’t just ignore the pain Thomas caused or the lies he told. Trust was shattered between these siblings.

Even so, Ridge won’t want Steffy at odds with her brother forever. He’ll likely try to mend fences between them somewhat in the week ahead. Of course, Ridge can’t undo the damage or convince Steffy to forgive and forget. Nor should Steffy forgive and forget! She has every right to feel the way she feels and needs time before she can truly think about forgiveness.

Nevertheless, Ridge might succeed in dialing down Steffy’s rage toward her brother. Even if he can’t, Ridge won’t want Steffy to feel like he’s making Thomas the priority. He kind of is, but that’s not how he’ll want Steffy to look at it.

Ridge will want to make sure Steffy feels supported as well, so he’ll talk to her and try to make her understand. This whole situation has been a real challenge for Ridge as a father. The Bold and the Beautiful spoilers say it’ll become even more of a challenge once the three of them are in the same room. Ridge, Thomas and Steffy will certainly have a lot to discuss – and argue about.

It sounds like Ridge will have his work cut out for him, but it’ll at least be nice to see Steffy’s perspective shown again. The Bold and the Beautiful spoilers say some hot drama’s looming, so don’t miss all the action. We’ll give you updates as other B&B news comes in. Stay tuned to the CBS soap and don’t forget to check CDL often for the latest Bold and the Beautiful spoilers, updates and news.