BY Heather Hughes on December 8, 2019 | Comments: one comment
Related : Soap Opera, Spoiler, Television, The Bold and the Beautiful 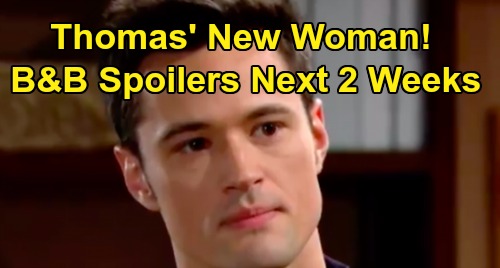 The Bold and the Beautiful (B&B) spoilers for the next two weeks tease that that major conflict’s on the way. During the week of December 9-13, Thomas Forrester (Matthew Atkinson) will shut down his sister’s criticism. Steffy Forrester (Jacqueline MacInnes Wood) will think Thomas needs to give up his manipulation tactics and back off Hope Logan (Annika Noelle), but he’ll have a very different plan in mind.

That plan obviously includes winning Hope over, but Thomas has a long road ahead of him. He’ll be willing to take this one step at a time – and the first step is a fashion faceoff at Forrester Creations. Thomas will team up with Hope for a runway battle with Steffy and Sally Spectra (Courtney Hope).

While Sally’s busy prepping for this showdown, Wyatt Spencer (Darin Brooks) will battle concerns about his romance. He’ll confide in Liam Spencer (Scott Clifton), which could be a bit awkward since Sally called Wyatt by Liam’s name recently. Nevertheless, Liam will probably back up Sally and insist it was simply a slip of the tongue. He definitely won’t want Wyatt thinking he has any type of romantic feelings for Sally.

Over with Ridge Forrester (Thorsten Kaye), he’ll be disappointed when he can’t resolve his marriage issues with Brooke Forrester (Katherine Kelly Lang). Neither one will budge on their reunion demands, so the divorce will move forward. After the papers are signed, Ridge will open up to Shauna Fulton (Denise Richards) about how he’s feeling.

Shauna will assure Ridge that he’s not to blame, but he’ll worry he’s at fault anyway. He’ll feel like maybe there was some way to save his marriage that he just couldn’t find. Shauna will give Ridge a sweet pep talk and let him know how much he means to her. She’ll cap off their chat with a kiss, so their romance will keep blooming in the “Bridge” divorce aftermath.

Other Bold and the Beautiful spoilers say Liam will need a favor from Steffy. He’ll want her help in proving Thomas is still dangerous. Steffy may not agree with that, but she’ll indeed be curious abut her brother’s plans and motives. She’ll agree to help Liam, but she may have some conditions. For Steffy, it’ll be about getting the truth instead of proving Thomas’ guilt.

Of course, Liam will think they’ll accomplish the same goal. He’ll be convinced that the truth is Thomas is still manipulating Hope and scheming to get what he wants. Steffy and Liam will try to find Vinny Walker (Joe LoCicero) later, but they’ll cross paths with Zoe Buckingham (Kiara Barnes) instead. They’ll get the scoop on Thomas from Zoe, who’ll admit some things that leave Liam even more concerned.

As for Brooke, she’ll be down in the dumps over her split from Ridge. Brooke will just hope that once Thomas screws up again, Ridge will see that his son hasn’t made any positive changes.

During the week of December 16-20, Hope will face a shocker. She’ll find that Thomas is actually showing interest in another woman. Hope will marvel over Thomas’ romantic setup for someone else and ponder how she really feels about that. Will Hope surprise herself by battling some jealousy? Will she mainly be glad Thomas isn’t so obsessed anymore?

Either way, you can bet this is another one of Thomas’ schemes. There’s no way he’ll move on from Hope that quickly. Whether this romantic setup is for Zoe or not, she’ll remain part of this B&B storyline. Liam and Steffy will hope Zoe’s willing to help them get the answers they seek. Will Zoe play a role in sinking Thomas or find a workaround that’ll help her win his heart instead?