BY Heather Hughes on December 7, 2019 | Comments: one comment
Related : Soap Opera, Spoiler, Television, The Bold and the Beautiful 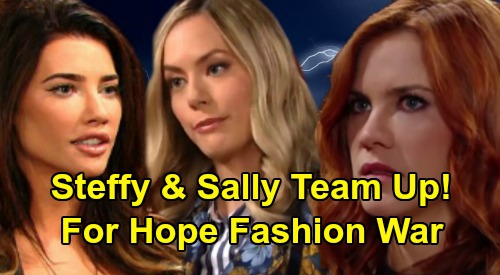 The Bold and the Beautiful (B&B) spoilers tease that Steffy Forrester (Jacqueline MacInnes Wood) will be ready for a big victory. After Thomas Forrester (Matthew Atkinson) convinces her to have a fashion faceoff with Hope Logan (Annika Noelle), Steffy will really throw herself into the competition. Her history with Hope will be fueling the conflict between Steffy’s intimates line and Hope for the Future.

Since Thomas will naturally be joining forces with Hope, Steffy will get some backup from Sally Spectra (Courtney Hope). The Bold and the Beautiful spoilers say Steffy will have a feeling they’re going to win this battle with ease. She’ll have total confidence in her own talent as well as the talent Sally brings to the table. Steffy will think they can accomplish great things together, so they’ll roll up their sleeves and get to work.

In an interview with Soap Opera Digest, Jacqueline MacInnes Wood talked about this showdown and what’s in store. For starters, Wood loves that Steffy and Sally have a chance to team up on this. “They are both strong, fierce women, and it is important that they can lean on each other,” Wood said.

Wood also suggested that this war with Hope could get ugly! B&B fans can expect some shockers and shakeups as this storyline heats up. “As things play out, it will get personal,” Wood promised.

As for Thomas, Steffy will have mixed feelings about going up against her brother. Wood suggested that Steffy’s definitely determined to defeat Thomas, but she’ll also appreciate seeing him having a purpose again and putting in some hard work. Basically, Steffy will enjoy watching Thomas obsess over something besides Hope – although working with Hope is obviously a big part of his motives.

Wood argued that after watching Thomas go to some dark places, Steffy will like seeing Thomas throw himself into fashion. She’ll feel like it could be a way out of that darkness. Even so, Steffy’s priority will be emerging victorious. “Of course, being the competitive person she is, she’s expecting to take this, but the fact that Thomas is seemingly back to his old self is a good thing,” Wood said.

However, “seemingly” being back to his old self doesn’t mean he is! Liam Spencer (Scott Clifton) will try to plant doubts for Steffy after he recruits her to uncover the truth. He’ll want Steffy to help him prove Thomas is still a dangerous manipulator, so she may be torn about that.

The Bold and the Beautiful spoilers say Steffy will indeed assist Liam, but they’ll definitely clash along the way. She just won’t be certain Thomas is as unstable as Liam believes. When it comes to the fashion showdown though, Wood assured fans that Steffy’s “extremely confident” Hope will lose.

Will Steffy indeed win as she predicts or will Thomas help Hope pull off a victory? Who are you rooting for in this fashion faceoff? We’ll give you updates as other B&B news comes in. Stick with the CBS soap and don’t forget to check CDL often for the latest Bold and the Beautiful spoilers, updates and news.