BY Marcy Cohen on May 29, 2019 | Comments: one comment
Related : Soap Opera, Spoiler, Television, The Bold and the Beautiful 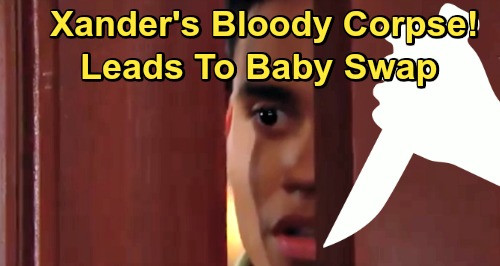 The Bold and the Beautiful (B&B) spoilers tease that Florence “Flo” Fulton (Katrina Bowden) will deepen her relationship with Wyatt Spencer (Darin Brooks). They’ll truly feel like it was destiny that brought them back together after all these years. Once Wyatt and Flo are on top of the world, it’ll be the perfect time for things to come crashing down – at least on Flo’s end.

That’s because a dark cloud is looming and it’s going to cause total chaos for the baby swap cover-up gang. Dr. Reese Buckingham (Wayne Brady), Zoe Buckingham (Kiara Barnes), Shauna Fulton (Denise Richards) and Flo are all part of this scheme now. Xander Avant (Adain Bradley) will soon join the secret club, which is sure to bring major drama.

However, a deadly twist will push this plot over the edge. Flo should be a mess when the first life is claimed due to the secret. It’s one thing to steal a baby and give her a happy life with an adoptive mother who loves her. That was a tough blow to Hope Spencer (Annika Noelle) and Liam Spencer (Scott Clifton), but at least Beth Spencer’s alive and well with Steffy Forrester (Jacqueline MacInnes Wood).

Flo could take comfort in Steffy’s love, but there’ll be nothing comforting about the sight of a bloody corpse! When it comes to the first casualty, The Bold and the Beautiful spoilers say Xander is the top contender. We say the first casualty since there may be more than one. B&B’s head writer and executive producer, Bradley Bell, has hinted at multiple deaths in his interviews lately.

No matter who takes drastic action to silence Xander, there are sure to be consequences. For starters, the secret-keepers will face more scrutiny than ever. If Xander indeed dies, the suspicious nature of his death can only spell trouble. Flo’s guilt should also rev up like never before. She’ll undoubtedly be left reeling as she processes how dangerous this has gotten.

Will the mystery of Xander’s demise lead to another mystery unraveling? Will several characters seek clues that ultimately lead them to an alive Beth Spencer? The Bold and the Beautiful spoilers say some great drama’s ahead, so stay tuned. We’ll give you updates as other B&B news comes in. Stick with the CBS soap and don’t forget to check CDL often for the latest Bold and the Beautiful spoilers, updates, and news.

The lie destroyed them. Now will the truth be told? Find out this week on #BoldandBeautiful! pic.twitter.com/iMCvk3oRud