The Bold and the Beautiful Spoilers: Steffy Keeps Beth, Hope Loses Out in Stunning Story Leak

BY Heather Hughes on May 15, 2019 | Comments: one comment
Related : Soap Opera, Spoiler, Television, The Bold and the Beautiful 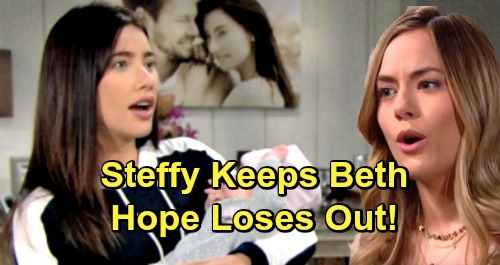 B&B will inch closer to the big reveal, but don’t expect any giant leaps toward the finish line. Bradley Bell, The Bold and the Beautiful’s head writer and executive producer, recently talked to Michael Fairman about the show’s hottest storyline. Everyone wants answers about when Hope Spencer (Annika Noelle) will finally be reunited with Beth Spencer, but it won’t be anytime soon.

“This is a secret that will be held for a good amount of time,” Bell said. “The secrets that are held the longest are the best when they come out.” That may be true, but many B&B viewers are already fed up with the long wait! Since we can’t change the show’s timetable, we should explore what this long-held secret will mean for the characters. It’ll make a huge difference in how this story plays out.

If Hope got Beth back right now, there would still be conflict and damage. Steffy has gotten attached to “Phoebe,” so she’d be devastated. Meanwhile, Hope’s grief would finally be relieved. She’d get her baby back, “Lope’s” marriage would be saved, Steffy would heal her broken heart and they’d all move on. The storyline would be wrapped up neat and tidy within a few months.

What happens this secret takes years to be exposed? What if “Phoebe” is three or four years old when the truth comes out? That could change the game drastically. “Phoebe” would be old enough to know she didn’t want to leave her mom. If Hope tried to drag “Phoebe” home, the poor kid would probably go kicking and screaming.

Steffy may not be “Phoebe’s” biological mother, but the bond between them will grow every day. Since Liam Spencer (Scott Clifton) will likely reunite with Steffy eventually, that’ll be another game-changer for this story. It could set up a custody battle once “Phoebe” is older.

Of course, even Hope herself could decide to stand down. She might feel it’d be too traumatic to rip Beth from the only mom she’s ever known. Thanks to the show’s decision to hold off, The Bold and the Beautiful spoilers say there’ll indeed be more complicated questions. Most B&B viewers would rather move things along, but at least we know the bombshells will be bigger and better by waiting.

Do you think Steffy may keep “Phoebe” permanently? It could happen if this hot plot takes long enough! We’ll give you updates as other B&B news comes in. Stay tuned to the CBS soap and don’t forget to check CDL often for the latest Bold and the Beautiful spoilers, updates, and news.