BY hellodrdavis on May 15, 2019 | Comments: 2 comments
Related : Soap Opera, Spoiler, Television, The Bold and the Beautiful 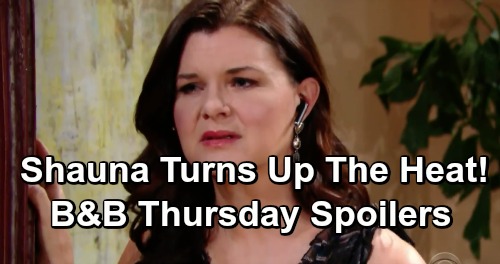 The Bold and the Beautiful spoilers for Thursday, May 16, tease that Katie Logan (Heather Tom) will get an earful. She’s got Shauna Fulton (Denise Richards) on a mission to try to seduce Bill Spencer (Don Diamont). Shauna’s playing the part perfectly and has managed to get Bill shirtless and alone in his bedroom. She’s really turning up the seductive charm on the unsuspecting mogul.

And while this is all going on, Katie will be listening to the whole exchange via Shauna’s phone. Shauna has just moved in for a kiss and asked Bill how long it’s been since his last fling, so she’s really turning up the pressure. But what will Bill’s next move be? Will he take the easy opportunity he’s been given, or will he stay loyal to Katie?

Well, while all of this plays out, Brooke Forrester (Katherine Kelly Lang) will be worried. She’s afraid that Katie’s plan is going to blow up in her face and Katie will end up devastated. Of course, in Bill’s defense, Katie did turn down a relationship with him, so he’s free to have a fling with whomever he chooses, but hopefully he still has hope that Katie will come around. Still, Brooke will worry about the worst possible outcome happening.

The Bold and the Beautiful spoilers say that Brooke will end up sharing what Katie’s up to with Donna Logan (Jennifer Gareis) and Justin Barber (Aaron D. Spears), so she’ll at least have people to commiserate with while Katie waits to hear what Bill’s going to do – or not do – with Shauna.

The good news here is that Bill will demonstrate that he’s really changed. Fortunately for Katie, she’ll hear Bill shut Shauna’s seduction attempt down after the big kiss. Bill will probably cite his desire to get Katie back as a reason for shutting the whole thing down, and he might even score some extra points with Katie if he mentions putting his son Will Spencer (Finnegan George) first.

Katie will be thrilled and probably very relieved to hear Bill stay loyal to her and avoid Shauna’s temptation. But she may start feeling guilty about the whole scheme. According to B&B spoilers, Katie will confess something to Bill, so it looks like she’ll fess up about unleashing Shauna on him. Bill will be shocked that Katie went to such great lengths, but he probably will understand why she did it.

After all, Bill has done some pretty shocking things in the past where Katie is concerned, so he probably won’t hold it against her that she decided to test his loyalty. Hopefully the whole thing will lead Bill and Katie to have a long discussion about their future together.