The Bold and the Beautiful Spoilers: Redemption Possible or Has Flo Gotta Go – B&B Character’s Future in Jeopardy? 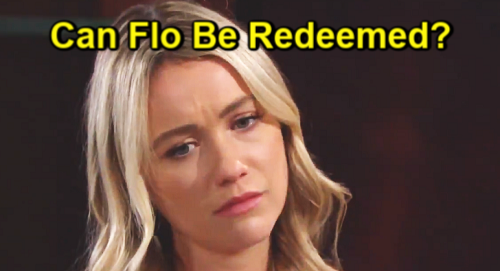 The Bold and the Beautiful (B&B) spoilers tease that Florence “Flo” Fulton (Katrina Bowden) will try to make amends for her actions. She’ll be desperate to earn the forgiveness of those she’s hurt, but is that even possible? Is the character still viable after this baby swap scheme?

Soaps always tend to provide redemption arcs and try to get fans back on a remorseful character’s side. Sometimes it works and sometimes it doesn’t.

Of course, there are always going to be some viewers who aren’t willing to move past certain things. However, this may be a special case since so many fans were riled up about this baby switch and Flo’s involvement.

There still seems to be some intense hatred for Flo floating around. It’s different when a new character makes an epic mistake versus an established one.

Was it a great idea for Steffy Forrester (Jacqueline MacInnes Wood) to sleep with Liam Spencer’s (Scott Clifton) father, Bill Spencer (Don Diamont)? Definitely not, but it was easier to let go and move on because we already knew Steffy.

Flo, on the other hand, came to town specifically to dupe Hope as part of this plot. She’s been scheming and lying from day one. Then, B&B decided to make Flo an old high-school sweetheart of Wyatt Spencer’s (Darin Brooks) as well as Storm Logan’s (William deVry) daughter. That made Flo’s deception even worse. It’s going to be tough to make Flo a character to root for now.

Fans Have Zero Sympathy For The Character Of Flo Fulton

On Twitter, B&B fans have been ripping Flo to shreds. “No sympathy for Felony flo nope 0% nada yenta,” one viewer insisted. “It’s her own damn fault.” Another fan said, “Flo, u didn’t see a way out? U got to be kidding me.” One more Bold and the Beautiful watcher tweeted, “Please kill this character! There is no redemption for her.”

Do you agree redemption may not truly work for Flo? It might be possible if Flo puts her life on the line in some upcoming drama. If B&B gives her a real chance to play the hero, maybe things could turnaround. However, apologies alone aren’t going to cut it. Flo can be sorry all she wants, but that doesn’t seem like enough to change viewers’ minds about her.