The Bold and the Beautiful Spoilers: Ridge Stunned By News Of Shared Kiss – Developing Feelings For Shauna?

BY hellodrdavis on October 10, 2019 | Comments: 2 comments
Related : Soap Opera, Spoiler, Television, The Bold and the Beautiful 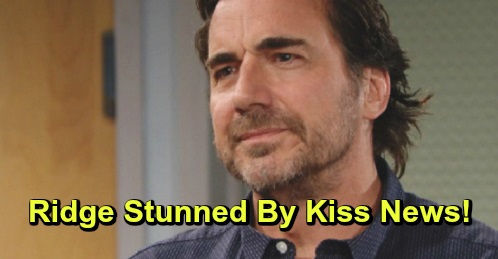 The Bold and the Beautiful spoilers tease that Ridge Forrester (Thorsten Kaye) will soon find himself rattled. As B&B viewers know, he’s gotten himself into a real mess with Brooke Forrester (Katherine Kelly Lang). Brooke found out about his night with Shauna Fulton (Denise Richards) and she hit the roof. That, plus the couple’s problems over Thomas Forrester (Matthew Atkinson) ultimately led to their separation, and Ridge moved out of the mansion. It’s a terrible situation, and it’s about to get more complicated.

Of course, Ridge is deeply concerned about his relationship with Brooke, but he hasn’t really found himself worried per se about Shauna being after him. He probably has an inkling that Shauna has a certain fondness for him, but he seems to be mostly under the impression that Shauna stayed with him that night simply out of the goodness of her heart, to make sure that he was ok. He doesn’t seem to have considered the possibility that Shauna could be seriously attracted to him and the effect that it could have on his marriage.

But soon, he’ll start to realize just what he may have gotten himself into that night at Bikini Bar. According to B&B spoilers, Ridge will be floored when Shauna makes a startling admission…that the two of them kissed when he was passed out drunk. Of course, it was a kiss totally initiated by Shauna and is something that Ridge wouldn’t have done if he had been sober and in his right mind. Ridge will be horrified by the news, and it will likely get his head spinning.

After all, he previously told Brooke that absolutely nothing happened between him and Shauna that night at Bikini Bar. And now he’ll find out that’s not really true. One wonders if Shauna will also tell him about all the cuddling that night as well, which in some ways was more intimate than the kiss. At any rate, Ridge will be stunned to learn that Shauna took advantage.

But Ridge will also probably be startled to realize that Shauna has burgeoning feelings for him. That will strike fear in him, especially after he witnesses Brooke and Shauna having it out after Flo Fulton’s (Katrina Bowden) surgery. He’ll probably realize that Shauna poses a bigger threat to his marriage than he previously thought, especially if she has notions of pursuing him…which it clearly seems that she does.

At any rate, the whole thing is going to make Ridge pretty nervous, especially since he’ll have to wonder if maybe he has burgeoning feelings for Shauna. Those would be difficult feelings to have, especially after what Shauna and Flo did to his daughter Steffy Forrester (Jacqueline MacInnes Wood). But sometimes you can’t help what you feel, and that just might be the case with Ridge!

Do you think that Ridge is starting to have feelings for Shauna? Stay tuned to the CBS soap and don’t forget to check CDL often for the latest Bold and the Beautiful spoilers, updates, and news.