The Bold and the Beautiful Spoilers: Week of October 14 – Hope and Steffy’s Explosive Showdown – Shauna Drops a Bomb on Ridge 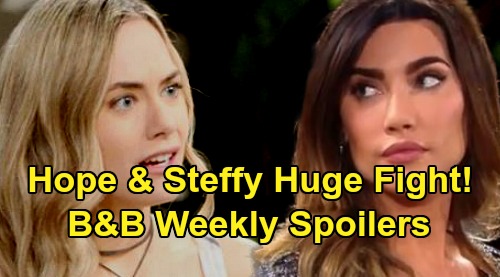 The Bold and the Beautiful (B&B) spoilers for the week of October 14-18 tease that some stunning moments are on the way. First, let’s talk about Florence “Flo” Fulton’s (Katrina Bowden) kidney donation. The truth about her sacrifice will leave the Logans in shock, and it won’t be long until Brooke Forrester’s (Katherine Kelly Lang) sparring with Shauna Fulton (Denise Richards).

Brooke will apparently view Flo’s gift as a manipulation on Shauna’s part. She may argue that Shauna pushed her daughter into it with dishonest motives. Of course, Katie Logan’s (Heather Tom) loved ones don’t need to be complaining! She’ll be alive, so Shauna may argue that’s all that matters. Besides, Flo genuinely wanted to help Katie and tried to remain anonymous.

Later, Wyatt Spencer (Darin Brooks) will make an impulsive move. He’ll be drawn to Flo’s apartment after getting updates on the kidney transplant. Wyatt will ultimately cave into temptation and show up at her door. The Bold and the Beautiful spoilers say Wyatt will want to thank Flo for saving Katie’s life. He’ll point out that it means a lot to him as well as his dad and little brother.

Bill Spencer (Don Diamont) and Will Spencer (Finnegan George) will indeed be ecstatic since Katie’s going to live. This family will get back on track, but Brooke and Ridge Forrester (Thorsten Kaye) will face more issues in their marriage. Thomas Forrester (Matthew Atkinson) will once again be at the center of the drama, which he’ll secretly love.

Nevertheless, Thomas will pretend to feel bad about causing chaos at Forrester Creations. Brooke and Ridge will fight about Thomas’ spot at the company, so he’ll think his mission to eliminate the Logans is working. Speaking of that mission, Thomas will reach out to Shauna again and hope she’ll help him tear “Bridge” apart. Since Brooke will still be giving her trouble, Shauna may decide to go for it.

B&B spoilers say Shauna will end up dropping a bomb on Ridge. She’ll admit she kissed him while he was passed out drunk, so Ridge should be upset about that. He’ll be even more upset when he finds out Shauna blabbed to Thomas. Ridge is trying to give his son another chance, but he knows Thomas can be quite the schemer. He’ll worry the news of that smooch will fall into the wrong hands – namely, Brooke’s.

Across town, Thomas will bump into Zoe Buckingham (Kiara Barnes) in Vincent “Vinny” Walker’s (Joe LoCicero) building. Zoe’s life was derailed thanks to the baby swap secret, so she may blast Thomas for that. Even so, Thomas will find himself feeling intrigued by Zoe. This could be the beginning of an interesting shift in their relationship.

Other Bold and the Beautiful spoilers say Liam Spencer (Scott Clifton) will get sneaky. He’ll secretly bring Beth Spencer (River Davidson and Madeline Valdez) to see Steffy Forrester (Jacqueline MacInnes Wood), which will bring Steffy’s painful admission. She’ll talk about all the pain she’s endured since losing Beth and her shot with Liam.

Hope will notice a message on Liam’s phone at some point, and it’ll be from – you guessed it – Steffy. Perhaps this message will tip Hope off to the secret Beth visit. Whatever the case, Hope and Steffy will wrap up the week with a showdown. They’ll have a fierce faceoff over Beth, Liam and all their old wounds.

It sounds like some exciting episodes are coming up. We’ll keep you posted as other B&B details emerge. Stay tuned to the CBS soap and don’t forget to check CDL often for the latest Bold and the Beautiful spoilers, updates and news.