The Bold and the Beautiful Spoilers: Ridge’s Horrible Realization – Discovers Brooke Was Right About Thomas

BY hellodrdavis on August 12, 2019 | Comments: 2 comments
Related : Soap Opera, Spoiler, Television, The Bold and the Beautiful 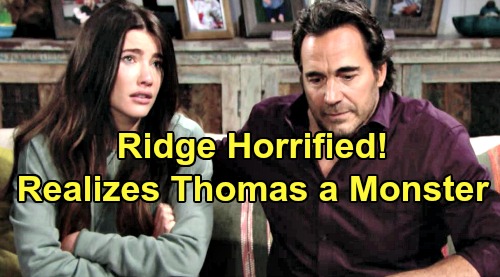 That was enough to understandably outrage Ridge and Brooke, and they were livid when they learned about all the people who knew about Beth Spencer’s (River Davidson and Madeline Valdez) existence and adoption by Steffy but didn’t say anything. They railed against Flo, Zoe Buckingham (Kiara Barnes), and Shauna Fulton (Denise Richards), and according to B&B spoilers Xander Avant (Adain Bradley) will soon be back on the scene and he’ll face their wrath as well.

But Ridge also faced another shocker. He was incredulous to hear from Flo and Zoe that his own son Thomas Forrester (Matthew Atkinson) knew about the Beth secret when he married Hope. And although this particular detail hasn’t come out yet, he’s soon going to hear about how Thomas chased Emma Barber (Nia Sioux) in her car and contributed to her fatal car accident.

Well, that’s not going to sit well with either Ridge or Brooke, and for very different reasons. For Brooke, the news about Thomas and his actions will just independently verify what she’s suspected all along – that Thomas had an unhealthy obsession with Hope and was up to no good. She’ll likely join the chorus against Thomas and insist that he be held legally responsible for his actions.

But for Ridge, anger will probably set in. His initial reaction will be disbelief, and he’ll surely think that Flo and Zoe are lying about Thomas and his involvement in Emma’s death and his threats against all of them. But at some point, Ridge is going to realize that Thomas is missing and that he’s left his son Douglas Forrester (Henry Joseph Samiri) behind. That won’t seem like Thomas, and Ridge will start to realize that something is very wrong.

Of course, Ridge will probably want to talk to Thomas and get his side of the story, but as details unfold and things start to become clearer about what happened between Thomas and all of the other players in this story, he’s going to start getting the picture that his son may have some very serious problems and a very dark side.

And it won’t help that Brooke will surely be railing against Thomas and leading the charge for him to be punished for his actions. It’s really going to put Ridge in a tough spot, as he’s going to want to turn Flo, Shauna, Zoe, and Xander over to the authorities, but he’ll also be worried about Thomas’ actions coming to light to the authorities.

At any rate, Ridge is going to be horrified as he starts to realize that Thomas just might have done all of the things that Flo and Zoe are claiming, and that Brooke has been right to be worried about Thomas this whole time. How do you think Ridge will react when he realizes what Thomas has done? Stay tuned to the CBS soap and don’t forget to check CDL often for the latest Bold and the Beautiful spoilers, updates, and news.