BY hellodrdavis on August 12, 2019 | Comments: one comment
Related : Soap Opera, Spoiler, Television, The Bold and the Beautiful 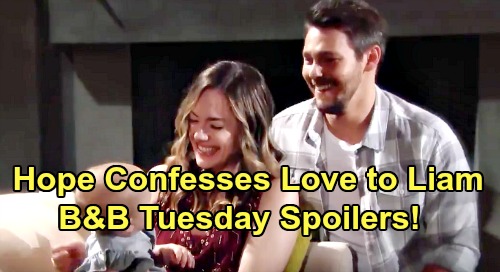 The Bold and the Beautiful spoilers for Tuesday, August 13, tease that Hope Logan (Annika Noelle) will do something that she never thought was possible – she’ll bring her daughter Beth Spencer (River Davidson and Madeline Valdez) home. With Liam Spencer (Scott Clifton) by her side, Hope will get herself and Beth settled into the cabin.

As B&B viewers know, Hope and Liam have just been through a dramatic scene at Steffy Forrester’s (Jacqueline MacInnes Wood) house, which culminated in Hope and Liam leaving a gutted Steffy behind. But now that they are alone in the cabin with their daughter, they’ll have a chance to just be happy and process everything that’s happened.

Of course, we can’t forget that just a few short hours ago, Hope was on her honeymoon with Thomas Forrester (Matthew Atkinson) and had no idea that her daughter was alive. Looking back on it, she’ll realize that she was in a terribly dangerous situation, and she and Liam will probably need to address where her marriage stands and what happens next.

Hope is surely going to want to start annulment proceedings as soon as possible, and she’s going to want to reclaim her family with Liam. According to B&B spoilers, she’ll tell Liam in no uncertain terms that she never stopped loving him. She may even tell him that she wants him back at the cabin full-time to be a father to Beth.

We’ll see how Liam responds to Hope’s declaration of love. In the moment, he may return her feelings, but from here there will still be a lot of red tape that they’ll have to deal with, including her marriage to Thomas, as well as the fact that Liam has been intimate with Steffy since he and Hope have been apart.

Meanwhile, on the new episode of B&B on Tuesday, August 13, Ridge Forrester (Thorsten Kaye) and Brooke Forrester (Katherine Kelly Lang) will be experiencing very different emotions in light of what’s happened with their daughters. Ridge has just watched Steffy break down in his arms over losing Beth, and he’s devastated by her pain.

On the other hand, Brooke will find herself overjoyed that Hope got Beth back. It looks like it will be a bit difficult for the two of them to reconcile their opposing feelings. Ridge will naturally be happy for Hope, and he’ll be glad that the baby transfer ended up going relatively smoothly, but he’ll be worried about how his daughter will fare going forward.

Of course, there’s another wrinkle that’s going to eventually drive another wedge between Brooke and Ridge, and that’s the issue of Thomas’ involvement in this whole baby mess. Ridge is still unwilling to accept that his son did all of the things that Zoe Buckingham (Kiara Barnes) and Florence “Flo” Fulton (Katrina Bowden) claimed, but a part of him surely fears that they might be telling the truth.

It probably won’t be long before Brooke is railing against Thomas again, and that is sure to irritate and worry Ridge. Both he and Brooke want those responsible for Hope and Steffy’s pain to be punished, and Ridge is eventually going to have to realize that Thomas is one of those people. It’s going to be a difficult road going forward for Bridge when the full realization of what Thomas has done – including his involvement in Emma Barber’s (Nia Sioux) death – comes to light.