BY Heather Hughes on August 26, 2019 | Comments: one comment
Related : Soap Opera, Spoiler, Television, The Bold and the Beautiful 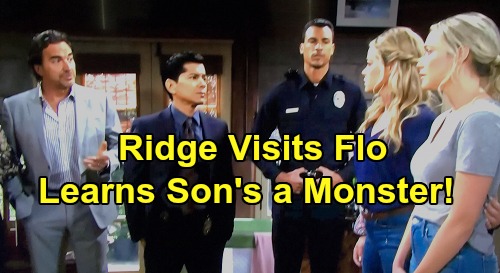 The Bold and the Beautiful (B&B) spoilers tease that Ridge Forrester (Thorsten Kaye) will be an emotional wreck thanks to Thomas Forrester’s (Matthew Atkinson) horrific ordeal. Hospitalized Thomas will linger between life and death, so Ridge will point the finger straight at Brooke Forrester (Katherine Kelly Lang). He’ll accuse Brooke of trying to murder his son, but she’ll insist that wasn’t how it went down.

Ridge will demand some answers, which will bring a detailed explanation that’s met with doubt. Brooke will go over the story of how she arrived at the cliff house and found Hope Logan (Annika Noelle) in a dire situation. She’ll remind Ridge of how dangerous Thomas is and argue that she did what she had to do. Brooke will defend her attack on Thomas as what any mother would’ve done in her shoes.

Ridge won’t be so sure he buys that. The Bold and the Beautiful spoilers say he’ll be distraught over Thomas’ struggle to survive and the fact that Brooke caused it. Ridge will be in denial about how out of control Thomas really was. Brooke will assure Ridge that Thomas was completely unhinged. She’ll once again try to make Ridge understand that Thomas needs psychological help.

Of course, Ridge will get that Thomas has been on a downward spiral, but he’ll still feel like Brooke’s not being straight with him. B&B spoilers say Ridge will argue with his wife during the week of August 26-30.

Ridge won’t think he can trust Brooke’s version of events since she’s been so against Thomas all along. He’ll feel like Brooke’s view of the situation was altered by her hatred for Thomas.

Ridge will hope to find out once and for all if Brooke attempted Thomas’ murder. However, he’ll have to go about that in an unusual way. Ridge can’t go back in time and witness something he wasn’t there to see. Instead, Ridge will talk to someone else and try to figure out if Thomas is really as dark as Brooke claims. He’ll think that’ll help him decide if Brooke is telling the truth now.

Ridge Forrester Urges Flo Fulton To Hold Nothing Back

During the week of September 2-6, Ridge will visit Florence “Flo” Fulton (Katrina Bowden). It’s possible Flo will make bail by then, but it sounds more like this will be a jailhouse visit. Ridge will catch Shauna off guard since he’ll need her help. He’ll be looking for answers – most likely about Flo’s perception of Thomas and just how dangerous he actually was.

Ridge might urge Flo to hold nothing back. He may wonder if there are any details that might give him a clearer picture. Ridge will just want the truth, even if it’s painful. Thinking Brooke intentionally tried to kill Thomas is more painful than a son with mental issues who couldn’t stop himself. Ridge will want to get to the heart of the matter and salvage his crumbling marriage if possible.