The Bold and the Beautiful Spoilers: Sally Blurts Out Another Name During Intimate Wyatt Moment – Engagement in Jeopardy

BY Heather Hughes on November 27, 2019 | Comments: one comment
Related : Soap Opera, Spoiler, Television, The Bold and the Beautiful 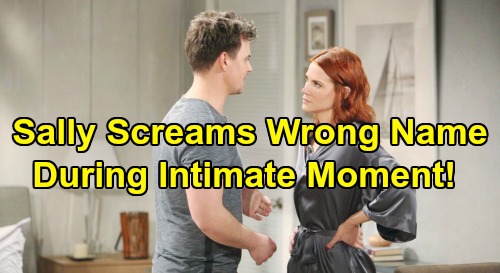 The Bold and the Beautiful (B&B) spoilers tease that Sally Spectra (Courtney Hope) will make a massive blunder. She’ll instantly realize her mistake after she blurts out the wrong name during an intimate moment with Wyatt Spencer (Darin Brooks). Wyatt will be stunned when he hears some other guy’s name coming out of his fiancée’s mouth. He chose Sally despite being torn over his feelings for Florence “Flo” Fulton (Katrina Bowden), so this will only add to his doubts about his current relationship.

Of course, the question on everyone’s mind is: What name will Sally utter? It’s possible Sally will call out the name of some guy from her own past. B&B invented a high school sweetheart for Wyatt out of the blue, so they could do something similar for Sally. However, it makes more sense to have Sally call out the name of someone we already know – someone currently on canvas that Wyatt could be jealous of!

With that in mind, let’s consider Sally’s romantic history on The Bold and the Beautiful. She was briefly interested in Liam Spencer (Scott Clifton), and it could certainly stir up some trouble if she calls out the name of Wyatt’s brother. Now that Liam’s getting back into the fold at Spencer Publications, it’d be interesting to reignite a bit of a sibling war.

Sadly, Liam seems doomed to waffle between Hope Logan (Annika Noelle) and Steffy Forrester (Jacqueline MacInnes Wood) for the rest of his life. Sally is never going to be a real contender for Liam’s heart, so Thomas Forrester (Matthew Atkinson) might be a better option. Although Thomas is currently obsessed with Hope, he was once Sally’s knight in shining armor. Thomas and Sally had plenty of ups and downs in their love story, but that relationship has been Sally’s most significant one on B&B so far.

We also have to remember Thomas was the reason “Wally” broke up in the first place. Sally knew Thomas was trying to win back Hope and kept it a secret, which set Wyatt off. It was only when Wyatt learned Flo’s far worse secret that he realized how hard he’d been on Sally. That led to Wyatt and Sally’s reunion, but could Thomas inadvertently put it in jeopardy once again? He could if his name is the one Sally cries out during a moment of intimacy.

The Bold and the Beautiful spoilers say a panicked and apologetic Sally will be desperate to fix this. She’ll keep pushing for a quick elopement and try to lock Wyatt into this marriage while she still can. Something tells us Sally’s plan may not work out as well as she hopes!

Wyatt will end up making a huge declaration after Sally’s blunder. Will that involve his lingering love for Flo or something else? We’ll give you updates as other B&B news comes in. Stay tuned to the CBS soap and don’t forget to check CDL often for the latest Bold and the Beautiful spoilers, updates and news.