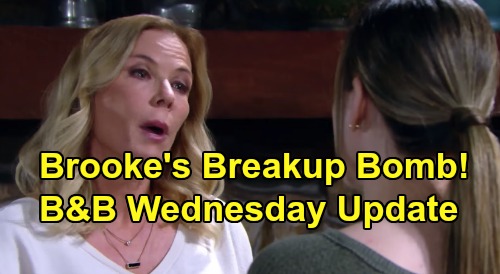 The Bold and the Beautiful (B&B) spoilers update for Wednesday, November 27, teases that Shauna Fulton (Denise Richards) will hear about Ridge Forrester’s (Thorsten Kaye) split. He’ll bring Shauna up to speed on the end of his marriage to Brooke Forrester (Katherine Kelly Lang) and the confrontation that led him to this decision. Shauna will naturally have compassion for Ridge, who’s hurting over his imminent divorce. Even so, she’ll be excited about the possibilities in front of them.

Shauna is eager to have her shot at a future with Ridge. She’ll offer more support in Wednesday’s episode and try to prove she’s his perfect woman. Ridge will eventually admit he gets something special out of spending time with Shauna. She’s given him something he never knew he was missing, so he’ll be sure to say so.

The Bold and the Beautiful spoilers state that a steamy kiss is on the way. Ridge and Shauna will lock lips after they strengthen their connection. The chemistry between them will be stronger than ever, so Shauna will urge Ridge not to go. She’ll want Ridge to stay with her, but he may shut this down for now. It would be a little soon to rush right into bed, but that certainly seems like a step they’ll take eventually.

In the meantime, Brooke will stun Hope Logan (Annika Noelle) with the news of her breakup. She’ll confess that Ridge was furious over her deception about Thomas Forrester’s (Matthew Atkinson) fate. There had already been plenty of problems for “Bridge,” so this was really just the final nail in the coffin. Ridge was appalled over the thought of Brooke lying to him about his own son’s “death.”

Since Ridge can’t get past all Brooke’s ultimatums and secrets, he decided they should call it quits. He insisted he was done and told Brooke goodbye. B&B spoilers say Brooke will relay all that to a heartbroken Hope, who’ll undoubtedly feel responsible. Liam Spencer (Scott Clifton) will also join this breakup discussion at some point, so he’s in for a shock once Hope comes clean.

The Bold and the Beautiful spoilers say Hope will tell the whole ugly story. She’ll explain what went down at Forrester Creations the night Thomas “died.” Liam won’t approve of the cover-up, but he may get that it was a complicated, overwhelming experience. There’s a good chance Liam will be more concerned about how Thomas spiraled out of control and caused the showdown in the first place.

Liam should be relieved that Thomas survived, but he’ll grow increasingly fearful about this custody agreement. Hope’s tied to Thomas permanently through Douglas Forrester (Henry Joseph Samiri), so Liam will fear this isn’t going to end well! We’ll give you updates as other B&B details emerge. Stick with the CBS soap and don’t forget to check CDL often for the latest Bold and the Beautiful spoilers, updates and news.