The Bold and the Beautiful Spoilers: Sally Says Yes To Wyatt’s Marriage Proposal – But Is Wyatt Really Over Flo? 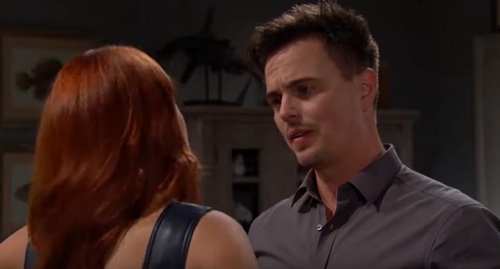 The Bold and the Beautiful spoilers tease that Sally Spectra (Courtney Hope) will have a life-changing decision to make. As B&B viewers know, Wyatt Spencer (Darin Brooks) has just dropped to one knee and proposed to her. It was a dramatic way for Wyatt to show his love for his beloved Sally, who was feeling a bit insecure about hopping right back into a relationship with him. And who can really blame Sally? After all, it wasn’t that long ago that Wyatt was living with Flo Fulton (Katrina Bowden).

But Wyatt doesn’t feel like he can ever be with Flo again, given her the huge con she perpetrated on some of the people Wyatt loves. As B&B viewers will remember, Flo pretended to be the birth mom to the baby that Steffy Forrester (Jacqueline MacInnes Wood) adopted – the baby who turned out to be Beth Spencer (River Davidson and Madeline Valdez). Wyatt just couldn’t take it that Flo had it in her to deceive Hope Logan (Annika Noelle) and Liam Spencer (Scott Clifton) about Beth, so he promptly dumped her.

And that led Wyatt to re-think his earlier breakup with Sally. As B&B viewers know, Wyatt got together with Flo before he was completely broken up with Sally, and that’s something he now seriously regrets. He was angry with Sally over the secret she kept with Thomas Forrester (Matthew Atkinson) back when Thomas was planning on breaking up Hope and Liam. But in retrospect, that secret seems like a big nothing compared to the secret the Flo kept from Wyatt and everyone else.

Now it seems that Wyatt may be overcompensating a bit. He wants nothing more than to be back together with Sally in every sense of the word, but she’s been hesitant to jump right back into a full-fledged relationship with him. She balked at the idea of moving right back into the beach house, stating that she wants to take things slowly and be sure about their relationship first. Understandably, she couldn’t get past the fact that Wyatt ping-ponged between her and Flo.

So when Wyatt decided to prove just how serious he was about Sally and got down on bended knee to propose, she was floored. Well, according to B&B spoilers, Sally will indeed say yes to his proposal, and “Wally” will officially become engaged. But despite the happy occasion, we have to wonder whether Wyatt is really over Flo at this point. The whole proposal to Sally seemed awfully rushed, and we know that Wyatt tends to jump right into relationships too quickly.

Well, if Wyatt’s not completely over Flo, then it’s probably going to become apparent relatively soon. Flo seems determined to win Wyatt back, and her mother Shauna Fulton (Denise Richards) is pushing her to fight for her man. If Flo really starts putting the pressure on Wyatt, then we might see him waffle a bit, especially since he already seems to be softening a bit toward Flo.

And we also have to factor Quinn Forrester (Rena Sofer) into the picture. According to B&B spoilers, Shauna will soon urge Quinn to help her make sure that Wyatt ends up with Flo and not Sally, and we all know that Quinn can be pretty persuasive. If Wyatt has any remaining feelings for Flo (which we strongly suspect that he does), then you can bet that Quinn will detect it and use it to her advantage.

It will be interesting to see how Wyatt handles all the pressure coming at him from Flo and his mother over dumping Sally. We suspect that he’ll initially dig in and profess his deep love and commitment to Sally, but over time he may start to wonder if he’s really made the right decision. Time will tell what happens here and who Wyatt ends up with in the long run, but we bet that Flo will put up a pretty good fight for her high-school sweetheart.

Do you think that “Wally” will really end up getting married? Stay tuned to the CBS soap and don’t forget to check CDL often for the latest Bold and the Beautiful spoilers, updates, and news.