BY hellodrdavis on November 24, 2019 | Comments: one comment
Related : Soap Opera, Spoiler, Television, The Bold and the Beautiful 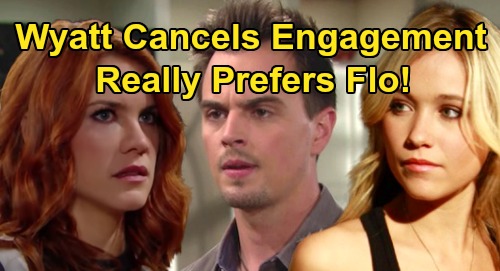 The Bold and the Beautiful (B&B) spoilers tease that Sally Spectra (Courtney Hope) will make a big suggestion. As B&B viewers know, she and Wyatt Spencer (Darin Brooks) got engaged after he impulsively proposed to her in order to woo her back into his life. Sally was feeling insecure about their reunion, especially since Wyatt had pretty quickly dumped her at one point for Florence “Flo” Fulton (Katrina Bowden). Wyatt ended up “proving” how strongly he felt for Sally by getting down on one knee and making an impromptu proposal, which Sally readily accepted.

But there were some oddities about the proposal. For one, Wyatt didn’t have a ring for Sally, which actually wasn’t all that odd in and of itself. But he hasn’t gotten Sally a ring since, and it’s been a while since the proposal, which is a bit odd. That, combined with Wyatt’s reconnection with Flo following her lifesaving kidney donation to Katie Logan (Heather Tom), might signal a potential problem here.

And speaking of problems, let’s not forget that Sally and Wyatt have issues when it comes to Wyatt’s mom, Quinn Forrester (Rena Sofer). Quinn would much prefer that Wyatt was with Flo, even though Flo deceived everyone for months by concealing the fact that Hope Logan (Annika Noelle) and Liam Spencer’s (Scott Clifton) baby was alive. Flo seems to have redeemed herself in Quinn’s eyes, and even in Wyatt’s eyes.

Well, Sally might be starting to feel nervous about the fact that she doesn’t have a ring yet and that Quinn isn’t gung-ho about their wedding, and it looks like she’ll make a big pitch to Wyatt that the two of them just run off and get married quietly and quickly. Of course, getting married quickly would ensure that they do, in fact, get married before Wyatt can think about going back to Flo, and it would get Sally out of having to make wedding plans with Quinn.

So, according to B&B spoilers, Sally will propose to Wyatt that they elope, but will Wyatt want to do that? Actually, the real question here might be whether Wyatt will still want to get married to Sally at all. According to The Bold and the Beautiful spoilers, Wyatt will have a talk with Liam in the near future, and Liam will wonder why he hasn’t bought a ring for Sally yet. Wyatt’s response will be surprising, and that probably means that he’s going to say that he’s having second thoughts about marrying her.

After all, Wyatt seemed pretty happy to reconnect with Flo after her surgery for Katie, and at that time he seems conflicted about his engagement. It seems that Wyatt might not have really thought through his engagement to Sally thoroughly. Or, it might have seemed like a good idea in the moment, but then later the reality of the situation set in and he realized that he acted impulsively.

What if Wyatt feels stuck in this engagement with Sally? If he does, then her suggestion that they elope quickly will probably make him feel overly pressured and maybe even a bit scared. It doesn’t seem like he’s going to have a favorable response, and the whole thing might just lead him to rethink the whole marriage idea.

What do you think? Will we ever see Wyatt and Sally get married? Stay tuned to B&B and don’t forget to check CDL often for the latest Bold and the Beautiful spoilers, updates, and news.