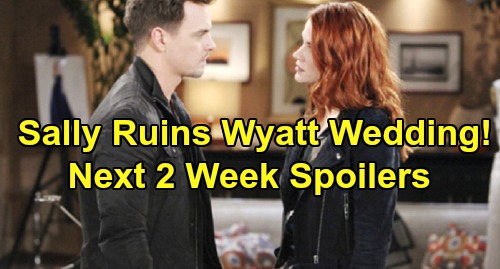 The Bold and the Beautiful (B&B) spoilers for the next two weeks tease that some hot drama’s ahead. During the week of November 25-29, we’ll see more Thomas Forrester (Matthew Atkinson) developments. Brooke Forrester (Katherine Kelly Lang) will be rocked by Thomas’ return from the dead, but she’ll have to turn her attention to Ridge Forrester (Thorsten Kaye) soon enough.

B&B fans can expect Thomas to relish this moment as he pushes Brooke to make a confession. He’ll taunt Brooke until he ultimately reveals what she’s been hiding from Ridge. The Bold and the Beautiful spoilers say Brooke will admit what went down at Forrester Creations. She’ll explain that Hope Logan (Annika Noelle) thought she killed Thomas, so Hope’s strange comments will start to make sense.

Ridge will be furious when he realizes Brooke tried to cover up what happened. He’ll be disgusted over Brooke’s deception regarding his own son’s “death.” Thomas thankfully only fell in cleaning solution, not deadly acid. Of course, Thomas’ body had been eaten up as far as Brooke knew. To leave Ridge out of the loop on something like this will be too much for him to get past.

Ridge will declare their marriage over despite Brooke’s attempts to protest. Later, Brooke will fill Hope and Liam Spencer (Scott Clifton) in on her destroyed relationship. That’ll lead Hope to confess everything to Liam, so he’s in for some shockers. Ridge will also confide in Shauna Fulton (Denise Richards), who will eventually give him a comforting kiss.

We should note that the show’s currently set to be preempted for Thanksgiving on Thursday, November 28. B&B has another preemption set for Friday, November 29. The impeachment hearings coverage threw off the schedule, so this might be an opportunity to adjust. As we get closer to Thursday and Friday, we’ll let you know if the show decides to play catchup.

During the week of December 2-6, Quinn Forrester (Rena Sofer) will spot Shauna and Ridge’s lip lock. She’ll corner Shauna afterward and demand some answers about whatever’s brewing between them. Next, Ridge and Steffy Forrester (Jacqueline MacInnes Wood) will dish out some tough love. They’ll confront Thomas about his indecent proposal and letting Hope believe he was dead.

Steffy and Ridge will feel like Thomas’ issues run deep. They’ll do whatever they can to help, but there’s only so much they can do without doctors and medication. It’s clear that Thomas could use a med or two as well as some therapy, but Ridge and Ridge may focus on lectures for now.

Other Bold and the Beautiful spoilers say Sally Spectra (Courtney Hope) will make an unfortunate error. She’ll misspeak in a way that’s significant to Wyatt Spencer (Darin Brooks) as they plan their wedding. Wyatt will make a serious life declaration as the result of Sally’s blunder, so stay tuned to see what’s in store.

Meanwhile, Ridge will calm down a bit and urge Brooke to do him a huge favor. He’ll think if Brooke can just forgive Thomas, maybe they can all move forward. Brooke may be tempted to take Ridge up on the offer, especially since she loves him and wants to save their marriage. At the same time, Brooke may feel like Ridge is asking too much of her.

Back with Thomas, The Bold and the Beautiful spoilers say he’ll try to persuade Hope to join forces with him at Forrester Creations. Thomas will make a grand gesture and hope it pays off. It sounds like some fantastic scenes are coming up. We’ll give you updates as other B&B news emerges. Stick with the CBS soap and don’t forget to check CDL often for the latest Bold and the Beautiful spoilers, updates and news.