The Bold and the Beautiful Spoilers: Steffy Faces Shock, Denial and Devastation – ‘Phoebe’ Ripped Away by Crushing Beth Reveal 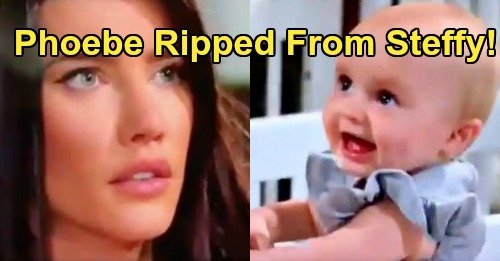 The Bold and the Beautiful (B&B) spoilers tease that Steffy Forrester (Jacqueline MacInnes Wood) is in for the shock of her life. Once Liam Spencer (Scott Clifton) pries the full story out of Florence “Flo” Fulton (Katrina Bowden), he’ll rescue Hope Forrester (Annika Noelle) from Thomas Forrester (Matthew Atkinson) and reunite her with her child.

Hope and Liam will have a private Beth Spencer reunion before it’s time to break the crushing news to Steffy. As excited as Liam will be about this discovery and what it means for him as well as Hope, this is going to be a devastating blow to Beth’s fill-in mom. Steffy thought she’d be raising “Phoebe Forrester” (Jacqueline MacInnes Wood) forever, but that’s obviously not going to be the case.

The Bold and the Beautiful spoilers say Steffy won’t understand when Liam tries to explain. He’ll insist that Beth isn’t dead, so Steffy will wonder how that’s even possible. Liam will have to elaborate on the colleague Taylor Hayes (Hunter Tylo) went through for this adoption. He’ll reveal that Reese Buckingham was the one who duped Taylor as well as “Lope” on Catalina Island.

It looks like Steffy will be in denial at first. In her defense, this will all sound totally insane. Steffy won’t think this makes any sense, but Liam will insist that’s his baby – his biological daughter and not just a little girl he’s serving as a dad to. Liam will think this explains why he feels such a strong bond with “Phoebe.” He’s always felt like her real dad, so he’ll be able to wrap his head around why.

Liam will likely comment on Hope’s deep connection with the baby, too. He’ll try to help Steffy understand and accept this. B&B spoilers say Liam will have to calm down and respect that this is incredibly painful for Steffy. He’ll be so sorry to break her heart, but what else can he do? That’s Hope’s child and she deserves to raise her.

Steffy will undoubtedly burst into tears over the prospect of having ‘Phoebe’ ripped away from her and having to say goodbye. Hope will get in on this conversation at some point, so there’ll be intense emotions all around. The Bold and the Beautiful spoilers say this will feel truly tragic to Steffy. She won’t know what she’s going to do without the baby she’s come to think of her as her daughter.

Will there be a custody battle at some point or will devastated Steffy just face the facts? We’ll give you updates as other B&B details emerge. Stay tuned to the CBS soap and don’t forget to check CDL often for the latest Bold and the Beautiful spoilers, updates and news.