The Bold and the Beautiful Spoilers: Thomas Has Big Plans For Zoe – Is She In Danger?

BY hellodrdavis on October 18, 2019 | Comments: one comment
Related : Soap Opera, Spoiler, Television, The Bold and the Beautiful 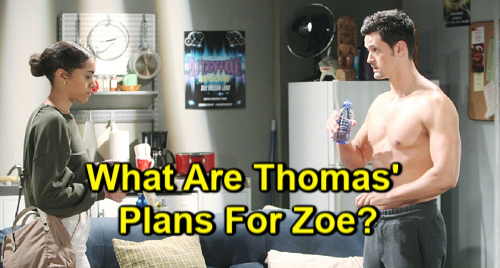 The Bold and the Beautiful spoilers tease that Thomas Forrester (Matthew Atkinson) has some big plans for his future. As B&B viewers know, he’s been designing in his down time, and apparently his designs have been fantastic. He recently showed some of his drawings to his father, who was enthusiastic about what he saw. It seems that Thomas is really gunning for a return to Forrester Creations, and he’s not going to let anything get in his way.

Of course, there’s plenty of resistance to Thomas returning to work at Forrester Creations. Brooke Forrester (Katherine Kelly Lang) is furious that Thomas even thinks he might still have his position at the family company, and if was up to her, then he’d be summarily fired. But fortunately for Thomas it’s not up to Brooke, since she’s not CEO. It looks like Ridge Forrester (Thorsten Kaye) will embrace his son as a designer at the fashion house once again, even though it might cause some friction between himself and Brooke.

Well, it seems that Thomas has a big plan for his return to Forrester Creations. According to B&B spoilers, Thomas will not only want to return to his family company, but he’ll want to play a bigger role than he has in the past. He sees himself as the future of Forrester Creations, and he’s not going to let anything stand in his way – not Brooke, and not even Steffy Forrester (Jacqueline MacInnes Wood), who might also balk a bit at his return to the company.

It seems that Thomas is developing a plan to secure his place within the ranks of Forrester Creations. Previously, he designed for the Hope For The Future (HFTF) line alongside Hope Logan (Annika Noelle), but that’s not going to be an option going forward, given his history with Hope. Rather, it looks like Thomas is going to shoot for bigger and better things – he may want to become a head designer at the fashion house and eventually step in as one of the company’s leaders, alongside Ridge and Steffy.

And according to B&B spoilers, Thomas will want some help and inspiration along the way, and that’s where he’ll turn to a familiar face…Zoe Buckingham (Kiara Barnes). Thomas will soon run into Zoe at his buddy Vinny Walker’s (Joe LoCicero) apartment building, and he’ll make a startling confession to her – that she’s the inspiration behind his recent fashion designs. Of course, Zoe was formerly a model for Forrester Creations and did quite well in the position.

In fact, it wasn’t too long ago that Zoe took the runway by storm when she donned the HFTF showstopper after another model couldn’t perform. She was the talk of the fashion industry for a hot minute and garnered a lot of attention for her modeling abilities and unique look. Thomas is probably keenly aware of that, and he might be staging her comeback in the industry and at Forrester Creations.

According to B&B spoilers, Thomas will soon let Zoe know how she fits into his plans for the future, so it certainly looks like he wants to bring her back into the fold. That could be a tough sell, given who her father is and that she kept the secret about Beth Spencer (River Davidson and Madeline Valdez), too, but then again Ridge has been pretty forgiving lately. He might be willing to take Zoe back, given how he’s forgiven Thomas.

We’ll see what happens here, but it certainly seems that we may be seeing Zoe and Thomas pair up and work together down the line – that is, if Thomas can convince Zoe to trust him after everything that went down with the Beth situation. But Zoe is a pretty ambitious person and will probably consider teaming with Thomas if it means a return to her dream job at Forrester Creations.

Do you think Zoe will come back to Forrester Creations? Stay tuned to the CBS soap and don’t forget to check CDL often for the latest Bold and the Beautiful spoilers, updates, and news.