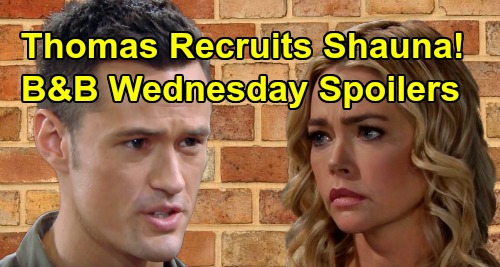 The Bold and the Beautiful spoilers for Wednesday, October 16, tease that Ridge Forrester (Thorsten Kaye) will reel from the big revelation that he just heard from Shauna Fulton (Denise Richards). As B&B viewers know, Shauna just told him that she kissed him during their night together at Bikini Bar, and that he kissed her back in his drunken state. That’s not going to be good news for Ridge, who just wants to put that night behind him and work things out with Brooke Forrester (Katherine Kelly Lang).

Of course, Ridge previously told Brooke that absolutely nothing happened that night with Shauna. Now he’ll know that something did happen – granted, it was just a kiss, but Brooke won’t consider it to be nothing. Ridge knows that she’ll likely be livid when and if she finds out about it. Of course, whether Ridge ever tells Brooke about the kiss remains to be seen – at this point, he’ll probably want to keep the whole thing between himself and Shauna.

Unfortunately, the prospect of keeping the kiss a secret is already out the window, since Thomas Forrester (Matthew Atkinson) was listening at the door and overheard Shauna tell Ridge about their kiss and the cuddling. Thomas heard as Shauna gushed about how wonderful the kiss was and that it meant something special to her.

Well, on Wednesday’s episode, Thomas will decide that he’s now got a great opportunity with Shauna that he shouldn’t pass up. As B&B viewers know, Thomas wants nothing more than to drive a wedge between Ridge and Brooke. He absolutely can’t stand Brooke’s attitude or her influence over Ridge, and he’d like to make the Forrester family a “Logan-free zone.” He’s willing to do just about anything to make sure that the Logans aren’t running his family or Forrester Creations.

Well, toward that end, he’ll approach Shauna with a proposition. B&B viewers will remember that Thomas has tried on one previous occasion to get Shauna to help him break up Brooke and Ridge. At the time, Shauna flatly refused to help Thomas and didn’t want to get involved in such a scheme. But some things have changed since that time. For one, Brooke has said some pretty awful things to both Shauna and Flo Fulton (Katrina Bowden).

Brooke has called Shauna a “slut,” slapped her, said that she and Flo should slither back to Las Vegas, and totally balked at any hint of forgiveness even after Flo donated a kidney to Katie Logan (Heather Tom). Shauna is sufficiently angry with Brooke at this point, so she might just be willing to work with Thomas to come between “Bridge.”

Plus, Shauna’s feelings for Ridge have totally intensified lately. She seems to really want the fashion mogul, so perhaps she’ll be willing to entertain the idea of working with Thomas, with the end goal of getting Ridge all to herself. She’d really be killing two birds with one stone – getting Ridge and sticking it to Brooke. She just might be tempted to take Thomas up on his offer this time around.