The Bold and the Beautiful Spoilers: Wyatt and Sally Split – Couple Can’t Overcome Sally’s Secret or Wyatt’s Cheating With Flo

BY hellodrdavis on April 29, 2019 | Comments: one comment
Related : Soap Opera, Spoiler, Television, The Bold and the Beautiful 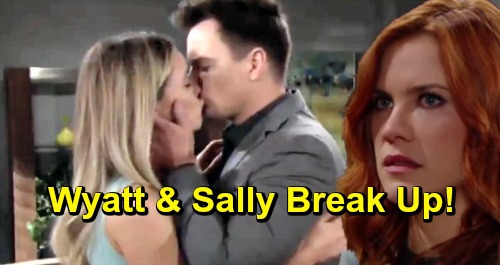 The Bold and the Beautiful spoilers tease that Wyatt Spencer (Darin Brooks) and Sally Spectra (Courtney Hope) will soon be in a bad place. These two enjoyed a carefree and happy relationship for several months after Sally returned from New York. They were just what each other needed, and their relationship progressed without any issues for quite a while.

But now there’s a major issue, and it has to do with Thomas Forrester (Matthew Atkinson). Thomas confided in Sally about his plot to break up Hope Spencer (Annika Noelle) and Liam Spencer’s (Scott Clifton) marriage. He swore Sally to secrecy, and she reluctantly agreed. Sally was hoping to talk Thomas out of his scheme, and she ended up keeping the secret from everyone, including Wyatt.

But according to B&B spoilers, Wyatt will soon learn that Sally is keeping a secret from him, and that it has to do with Thomas. First, Wyatt will encounter Sally and Thomas having an intense conversation, and when he enters the room, they’ll abruptly stop talking. That will give Wyatt pause, and he’ll wonder what might be going on between the exes.

Then, Wyatt will notice some texts on Sally’s phone between herself and Thomas, and the texts will refer to a secret. Wyatt will freak out and jump to the conclusion that Sally and Thomas are having an affair. The Bold and the Beautiful spoilers say that Wyatt will be feeling paranoid and upset, and he’ll turn to Florence “Flo” Fulton (Katrina Bowden) for support.

Of course, Wyatt will be relieved to know that Sally wasn’t cheating, but it looks like he’ll be livid that Sally would keep such a horrible thing secret from him, especially when it directly impacts his brother Liam. Sally will probably feel terrible for keeping the secret, and she might try to explain that she felt an obligation to Thomas, but it looks like Wyatt won’t want to hear it.

According to Bold and the Beautiful spoilers for new B&B episodes the week of May 6-10, Wyatt and Sally will ultimately split, so it looks like Wyatt won’t be able to forgive Sally for keeping a secret like this one. We’ll see if Wyatt also comes clean about kissing Flo as well. If he does, then that might very well contribute to the breakup, too.

Are you sad to see “Wally” come to an end? Stay tuned to the CBS soap and don’t forget to check CDL often for the latest Bold and the Beautiful spoilers, updates, and news.