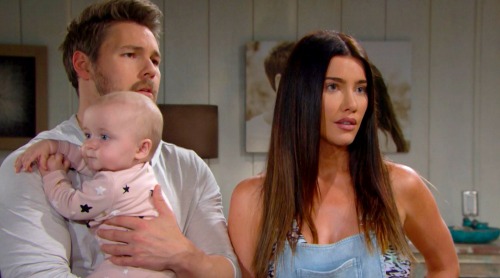 The Bold and the Beautiful spoilers has some news to pass on about Scott Clifton, a popular B&B star, and his recent response to some disparaging comments directed at him on Twitter. Scott Clifton, who portrays Liam Spencer on the CBS soap, is quite active on Twitter and enjoys discussing various issues related to the show (and even issues totally unrelated to the show) with fans.

But recently, someone publicly bashed him on Twitter, accusing him of making disparaging comments toward the B&B character of Steffy Forrester (Jacqueline MacInnes Wood). We won’t get into the specifics of the tweet, which has since been deleted from Twitter, but suffice it to say that the person’s words weren’t kind nor constructive.

It appears that Scott has faced other comments along these lines as well. And so finally he decided to address the issue with his followers. He started out by saying: “Guys, we need to talk about this. If it weren’t for fans, I literally wouldn’t be able to feed my family. I owe you all so much, and your passion drives mine. I’ll never stop being grateful. But I don’t want to have to keep fielding these toxic and untrue accusations.”

Scott continued and specifically addressed the baby swap storyline that’s playing out on screen this week, August 5-9. He stated: “This storyline has been extremely polarizing. I totally get it. Some fans feel like they’ve been neglected, and that their heroine has been abused. They aren’t crazy. Jacqui has been focusing on growing her beautiful family, and the story has had to lean more on Hope and Liam. So if you can’t stand Hope or Liam (or both), you feel sidelined during their ‘happy ending.’”

Scott went on to address how difficult it is for some fans to separate him from his character Liam, and he noted that he doesn’t have any loyalty toward one specific couple or another. He also stated that in interviews he sometimes makes jokes or pokes fun at characters, but that it does not indicate any favoritism.

He also stated: “I also forget details that fans might remember (like whether Hope and Liam were married or not when Beth was conceived). This happens ALL THE TIME, and again, it’s not because I have some agenda or a preference; it’s because shooting hundreds of episodes a year becomes a blur.”

“All this is to say, please give me the benefit of the doubt,” he continued. “Please don’t look for reasons to vilify me because my character is a tool. I’m doing my best And if something I say (or don’t say) raises a red flag, just *ask* me. Don’t put words in my mouth or thoughts in my head.”

He concluded by saying: “We are in a relationship, you and me. It’s not the most conventional relationship, but we are important members of each other’s lives all the same. And relationships take work, patience, forgiveness, honesty, and gratitude. I promise to keep working at it, Dear Fan, if you will.”

Scott has received a lot of replies to his overall message on Twitter, and the good news here is that most of the responses are positive, with many people tweeting their respect for Scott and what he does. For example, one follower stated: “I can’t believe you have to go through this, Scott!! You’re a fabulous actor, playing a part written by someone else, and doing a great job at it. And by your general comments on this platform, it’s obvious you are also a great guy. Hang in there.”

Of course, there will always be fans who have difficulty separating actors from the characters they play, and there will always be the unfortunate negativity on Twitter, but perhaps Scott’s words touched some people and helped to explain his point of view. It also might start an important dialogue among fans.

Do you think that Scott’s comments put things into perspective? Stay tuned to the CBS soap and don’t forget to check CDL often for the latest Bold and the Beautiful spoilers, updates, and news.

Guys, we need to talk about this.

If it weren’t for fans, I literally wouldn’t be able to feed my family. I owe you all so much, and your passion drives mine. I’ll never stop being grateful.

But I don’t want to have to keep fielding these toxic and untrue accusations. THREAD: https://t.co/fFI5GY6VOD