The Bold and the Beautiful Spoilers: Sean Kanan Wants B&B Return – Is Deacon Sharpe Out of Jail and Coming Back? 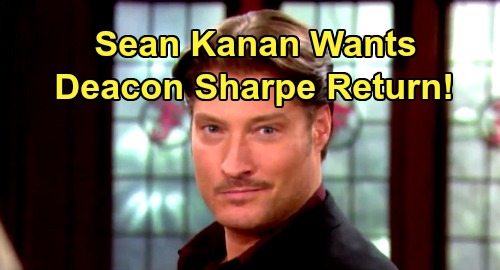 The Bold and the Beautiful (B&B) spoilers tease that the chaos surrounding Beth Spencer (River Davidson and Madeline Valdez) will continue. One little baby has caused a whole lot of drama for all the adults involved! Of course, sweet Beth is innocent in all this, but the backlash over her swap will rev up and bring more consequences.

It looks like Florence “Flo” Fulton (Katrina Bowden) will be arrested soon, but there’s another character who’s been locked up and might deserve his freedom by now. Deacon Sharpe (Sean Kanan) is still behind bars, but it’d be great to see him make a Bold and the Beautiful comeback. Sharpe himself said he’d be on board in an exclusive interview with Soap Opera News.

“I loved playing Deacon,” Kanan said. “I would really love to go back and join The Bold and the Beautiful. Deacon’s been in jail for a while now. I think it’s time he gets out!” Hope just got Beth back, which means Deacon needs to bond with his granddaughter. It’d be fun to see Deacon reenter the mix and perhaps redeem himself a bit.

Then again, Deacon can never fight his sneaky side completely. Maybe he could reconnect with Quinn Forrester (Rena Sofer) and do some scheming. She can never shake the sneakiness either, so they were always two peas in a pod. Since Quinn and Eric Forrester (John McCook) are getting a tad stale at this point, a Quinn and Deacon reunion might be a good way to keep things interesting.

Comebacks are often appreciated by longtime fans of the show, so The Bold and the Beautiful has a golden opportunity here for a Deacon Sharpe return. It’s at least nice to know Kanan’s willing if they call. There’s no guarantee B&B will indeed make that call, but we’ll hope for the best and cross our fingers for Deacon’s eventual comeback.

In the meantime, Kanan will stay busy with a new film called Colonials. He’ll begin work on that at the end of August – and he’s sporting a new beard for it according to a recent tweet. Kanan will also be doing a project he wrote and produced himself, which starts production in September. He’s teaming up with his wife on that, so there’s lots of exciting news all around.